Playing Fetch with Bummer and Lazarus

I think this weekend just might be the perfect weekend to accomplish #41 on The List which is "Put Flowers on Emperor Norton's Grave".
Today, Septemeber 17 is the 150th anniversary of the day Joshua A. Norton I declared himself Emperor of the United States. A short time later he added "Protector of Mexico" to his title, but then removed it again when Maximilian of Mexico came to power stating "it is impossible to protect such an unsettled nation" 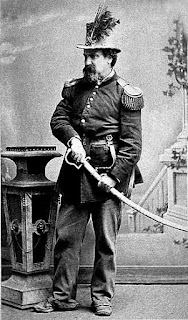 Emperor Norton was this kooky guy who moved from London to South Africa when he was about 2, then came to San Francisco when he was an adult. He had a ton of cash but then lost it all when he tried to corner the rice market and failed. Seems he bought up a bunch of rice coming from China and he was going to sell it at a huge profit, then rice started coming in from Peru, thus bringing the price of rice down and he lost all of his money. He tried to skip out on paying it, was sued and the case went all the way up to the California Supreme Court. He skipped town, only to come back a few years later. Aside from being a crooked businessman, he seemed to be just a normal guy but when he returned something about him was a bit "off". He left San Francisco a broken man with his tail between his legs and returned a self proclaimed emperor. His proclamation follows
At the peremptory request and desire of a large majority of the citizens of these United States, I, Joshua Norton, formerly of Algoa Bay, Cape of Good Hope, and now for the last 9 years and 10 months past of S. F., Cal., declare and proclaim myself Emperor of these U. S.; and in virtue of the authority thereby in me vested, do hereby order and direct the representatives of the different States of the Union to assemble in Musical Hall, of this city, on the 1st day of Feb. next, then and there to make such alterations in the existing laws of the Union as may ameliorate the evils under which the country is laboring, and thereby cause confidence to exist, both at home and abroad, in our stability and integrity

Emperor of the United States.

He drafted all sorts of other proclamations which can be read here. He abolished Congress. He fired Abraham Lincoln. He called for a bridge to be built across SF's bay (in 2004 an SF Supervisor tried to get the new span of the Bay Bridge renamed the Emperor Norton and failed), He bans the F-word (Frisco), the list goes on. He also created his own bonds stating that at a later date someone could return the bonds and be repaid at 4% interest.

He was arrested for vagrancy once after some cop with something to prove hauled him off to jail. He was released and from then on no cop ever touched him again.

Two stray dogs name Bummer and Lazaurs became loyal members of his court. It is said that they followed the Emperor everywhere. However, it is also said that the Emperor didn't care for these dogs, they were simply groupies.

The character of "the king" in The Adventures of Huckleberry Finn by Mark Twain is based on Norton, also Robert Lewis Stevenson used Norton as an actual character in his book The Wrecker. RLS's stepdaugher Isobel Field wrote about him in her book "This Life I've Loved" "He was a gentle and kindly man, and fortunately found himself in the friendliest and most sentimental city in the world, the idea being 'let him be emperor if he wants to.' San Francisco played the game with him."

On January 8, 1880, Emperor Norton died on the corner of California Street and Grant Avenue. Depending on the source, anywhere from 10,000 to 30,000 people attended his funeral. Today he is resting comfortably at the Woodlawn Memorial Park in Colma, just 15 minutes south of San Francisco.


Yeah, #41 on Saturday.
Brought to you by Andrea