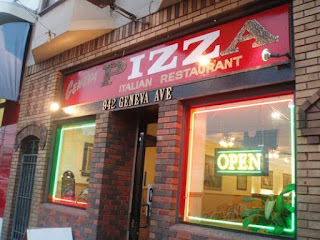 
When I was a student at City College, San Francisco, I worked at a pizza place. The job itself was pretty easy; seven tables, 6 seats at the bar, a constantly ringing phone. I had no problem keeping up with the work there.

The work environment was something else entirely, to say the least. The owner was Indian. He lived upstairs with his three kids, all under 10, his mom, his cousin and his cousin’s wife, who was Native American, vegetarian and LOVED mushrooms. Yes, mushrooms, the magical kind.

There was one Indian cook, a really old Pakistani dishwasher, a Brazilian cook and two Brazilian delivery guys.


When I would get to work, my boss’ kids would be downstairs usually running around and making a mess of things. My boss would be sitting in his usual spot by the cash register watching whatever sport was in season, talking with a few regulars who were steadily working on the freshly tapped keg of bud lite. They would drink until they pissed themselves, then try to leave but couldn’t find the door, even though the door was only 5 feet away from them.

My boss’ mom, everyone called “Buajee” would follow me around, certain I was going to steal something or cheat her son. She would scold the kids by pointing her fingers at them, yelling “choop”. They didn’t listen to her.


One of the delivery guys called me “gatihna”. It’s “kitty”, but it is also “foxy lady”. I didn’t mind it. I was 23, cute and this guy was nice. He once asked me to marry him so he could stay in the country. He had a whole plan that took ½ an hour to explain to me. I didn’t marry him. I had a boyfriend.

His older brother was the other delivery guy. He was nice, quiet. He had an x-wife and 2 kids. His kids were super cute and he was a good daddy.

The Brazilian cook ended up buying his own pizza place. No real interesting stories about him. The other cook went to work at the pizza place across the street, but I don’t know why. Seemed like the same job to me, just closer to the corner.

The dishwasher was interesting. Right before I started working there the dishwasher was a good looking Latin guy. My boss’ wife took a liking to him, got pregnant and moved to Fresno with the dishwasher and her new baby. From that moment on my boss vowed to only hire ugly old men as dishwashers. This old guy was OK. He didn’t pay too much attention to the front of the house. My friend Pasu told me that the dishwasher liked to tell him dirty jokes in Urdu and he was super lecherous. Whatever, he didn’t bother me.

The place was pretty stressful. Late at night when my boss would go to the bar down the street his bookie would come in and demand I take money out of the register to pay him. This freaked me out and got “Buajee” really mad. I don’t know why she was mad at me. She should have been mad at her gambling son.


There was also this mentally disabled woman who would demand coffee every day around 5pm. She would come in wanting a big styrofoam cup filled with coffee with "two iceses" so she wouldn't burn her "mouse". If we refused she would sit on the floor and scream. One time we told her we were out of coffee, she dug in her purse, pulled out a giant jar of instant coffee and asked for hot water with two iceses.

There was this guy who would come in. He was my boss’ friend. His name was Stanley. Stanley was an icky man. He was a cab driver. At first he was nice. He would give me rides home once in a while. In his cab he would listen to taped shows of Dennis Erectus. He would drive by my house at all hours and try to visit. He would bring all kinds of beer and stuff over and leave it there. We still didn't want him to come over.

My roommates were amused by him. My friend PC tried to convince Stanley he was psychic by always answering the phone “Hello Stanley” in the hopes that it would be Stanley. When Stanley did call and PC answered the phone that way it would totally freak Stanley out. For my friend EAW’s 25th b-day Stanley came over. Nobody invited him. He just showed up. Lucky us because the present we got her was fantastic and it really really freaked Stanley out. We got EAW a stripping clown. He wasn’t sexy or anything. He was a fat hairy guy with a hairy but. He stood in the middle of the kitchen playing a trumpet wearing nothing but a tiny piece of fabric between us and what God gave him. Stanley got a great view. He left immediately. The next day he handed me a note that said he wasn’t going to talk to me for one whole week.

Stanley was always at the restaurant. He would slip weird notes into my tip cup and claim they weren’t from him. He would follow my bus home in his cab. He would circle my block all the time. He would leave stolen electronics at my doorstep as gifts for me (sometimes his fares would pay him in stolen merchandise)...

Stanley was so creepy that I told my boss that I wouldn’t come to work anymore if Stanley were there. If he did show up I would walk out. My boss told Stanley not to show up anymore, so instead of coming in, he would stand at the front door and “pssst” my boss to come outside and talk to him.


At first I found the place amusing. Towards the end I hated going to work. I ended up freaking out one night and storming out of there, never to return until a few months ago. Hubby and I went there for some pizza. There's a new owner, the place is all cleaned up and it looks nice. The oven wasn't hot, though so we went next door and got burritos.

There were some good times. We celebrated everyone’s birthday with weird Indian pastries covered in honey. The birthday person had this sweet, syrupy cake balls shoved into their mouths whether they wanted it or not. Every Thanksgiving my boss would rent a big passenger van and take everyone to Reno. The delivery guy that called me “gatihna” and I would drive to Palo Alto after work and dance at The Edge almost every Saturday.

There were some sad times, too. My boss went to India to find a wife. He did. When she came to the US she hated it so much. Rather than going back to India to face her family humiliated, she hanged herself in the bathroom.

To this day, whenever work gets too stressful I have “The Geneva Pizza Dream”. All of my tables are full. All of my customers are demanding. The phone keeps ringing. Either the pizza never comes up, or they all come up at once and I can’t get them to the tables. The keg needs tapped, all I get is foam, the keg is empty, etc.


However lately I’ve been having different version of the GP dream. Instead of life being totally out of control in the dream, I’m the one in charge. I go back to work at GP, the new owner needs to do some painting. He shows me what he wants and I tell him it looks stupid and refuse to do it


I go back to work at GP and do a great job but hate it there because it’s a stinkin’ pizza place.

Or, the one I had last night


My hula siblings, plus hubby and some other friends that aren’t from hula, but in my dream they were, went to some camping adventure thing. We were all in a big open field. Hula Bros MC, KH and CP were there along with my friend PC (PC and I have been friends since we were 10 and 8. He’s not part of my hula friends but in my dream he was, oh, and he's also the same PC from the Stanley stories above) We all hung out under the stars and watched a meteor shower then learned a new version of Noho Paipai. After that we went to GP to have some pizza. MC and KH weren’t there anymore. CP and PC were there. In my dream they were really good friends. (I thought it was weird because to my knowledge they don’t know each other, but they are both good guys and would probably get along just fine in real life). We had some pizza, but it wasn’t pizza. It was like this weird deep dish pie thing that was square, really really greasy and super yummy. My boss came in, but it wasn’t the Indian guy. It was Hubby’s old boss from a former employer. The guy looked like Lenin. He was really mad that I had invited so many people to the pizza place and stayed mad even though everything was paid for.

I wonder what it means.

Email ThisBlogThis!Share to TwitterShare to FacebookShare to Pinterest
Labels: Dreams