Does anyone equate Thanksgiving with Pilgrims and the Wampanoag Indians anymore? In my opinion, not really. Sure, we all know the Thanksgiving story, but that's not really why we gather on the 3rd Thursday of every November.

Thanksgiving has evolved into something different. It's turned into a day to be thankful for what you have, spend the day with your family and watch football. We eat a lot, drink a lot and generally have a good time. Every family has their own special traditions but, everyone across the country is pretty much doing the same thing.

I like Thanksgiving because it doesn't matter your religion, class, personal beliefs, sexual orientation, your heritage or any of the many other differences we might have; as Americans we have this day in common, and the cool part is, you don't have to be American to partake in it. Everyone is invited to celebrate, you just have to show up.

I got an email today from someone. I'm sure a few of my readers got the same email. I like what he said:
"...I wish to greet you all here, and to wish you and your families and your special people the happiest of times this Thanksgiving. I, like many of our friends never grew up with the Thanksgiving spirit as it was so uniquely American. Over all these years it has become for me a very special occasion as it embodies the true goodness and generosity of the human spirit, uncomplicated by religion, politics, or the other divisive aspects of society. It is a time for the human touch, and it is a very good thing. So, with that in mind, I want to wish you all a most special and reflective Thanksgiving. It would be trite in the extreme to suggest that you look around you and appreciate what you have and revel in it. Life doesn't work like that. We all have problems and issues to deal with. Less trite, perhaps, would be to suggest that you enjoy this great holiday with your precious loved ones and look forward to the next one. That's what we are doing, and that's for sure. "

So put on your eating pants and your baggy shirt with the empire waist and grab a fork. It's turkey time.
Brought to you by Andrea No comments:


#60 Get rid of yucky chipped dishes and replace
For my birthday 6 weeks ago I got a gift card from Bed Bath and Beyond. Last week one of The Girl's friends had dinner at our house. As I was setting the table I noticed we didn't have enough of the same kind of dishes for everyone to have the same kind of dish. My family's talent for not breaking dishes in our old porcelain sink is not well cultivated. The dishes I bought when we moved into our house almost 13 years ago have been broken, chipped, cracked. We needed some new everyday dishes. A friend of mine got wind of me going to BBB yesterday and said she had some coupons I could use. Boy did she. She handed me a stack of coupons that was seriously, at least 50 coupons deep. She told me that even though BBB has expiration dates on their coupons they'll still honor them and you can use as many coupons as you have items. With my gift card and the coupons,  I bought $68 dollars worth of dishes and spent only . . . . .(wait for it) . . . . .$5.41. Sweet.
Brought to you by Andrea 1 comment:

Email ThisBlogThis!Share to TwitterShare to FacebookShare to Pinterest
Labels: 101 Things

Quite some time ago I came across a blog called MerMag. The author posted about a project she made for one of her kids. I LOVED the idea.

I sent the post to my dad, made him read it and then instructed him to go to home depot to buy the supplies listed exactly as Ms. MerMag had described. Having the kind of dad I have (a good one), he bought the required wood and cut squares for me according to Ms. MerMag's  instructions.

For my son's birthday, my dad sent me about 100 freshly cut tiles from home depot. I bought some red, blue and yellow paint, took painters tape and made beautiful straight lines on the diagonal of the squares and got to painting.

So here they are. Don't look too closely or compare them to Ms. MerMag's, because her squares are painted way better. 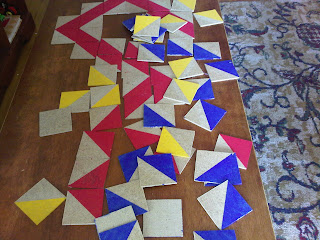 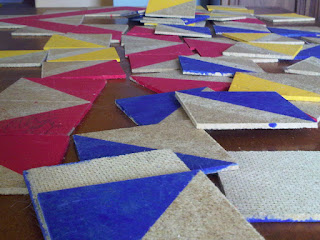 My boy isn't too into making geometric shapes but he likes when I arrange the tiles to create a road that he can drive his little toy cars down. He also likes to stack the tiles and knock them down but his favorite thing to do is throw them across the room or at the cat.

﻿
﻿
Brought to you by Andrea No comments:

Conversation with a Salty Bartender

This afternoon I had to go to the restaurant on the bottom floor of my building and pay for a cheese platter for some thing-thing being held at my office today.

As it's 4pm, the restaurant was not yet open for dinner. Only the bar was open.

This is the interaction I had with a salty bartender and a drunk patron.

Me: Sorry sir, I don't have any bananas, will you take clams?
Salty Bartender chuckles, winks at me and takes my credit card.
Drunk Patron: Hey, I didn't know they sold banans here.

Email ThisBlogThis!Share to TwitterShare to FacebookShare to Pinterest
Labels: conversation

﻿﻿ ﻿﻿ This morning I woke up with a bit of a tickle in my throat. I couldn't stop coughing.

Hubby and I set our own alarms. Mine was about to go off in a minute or so; his had yet to chime, beep or bakawk! I decided to make my way to the couch and finish my morning hitting-snooze-for-the-next-20-minutes routine.
I don't remember my dream during the last "snooze session" but as my alarm rang for the last time I woke up and said aloud "Stop being so creepy, Jim Carrey."
I wonder what that was all about.
Brought to you by Andrea No comments:

This morning Hubby and I took the Kiddies to Ocean Beach. 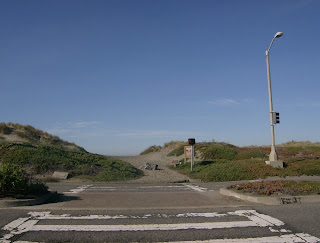 It was a really beautiful morning, but that was not the reason for our 9am stroll.
According to the Ocean Beach Bulletin, massive amounts of (probably) moon jellies had washed ashore. We had to see it. It was pretty cool. The largest jellies were about a foot in diameter. At some spots, the concentration was so rich the beach looked like it had been paved with jelly cobblestones. 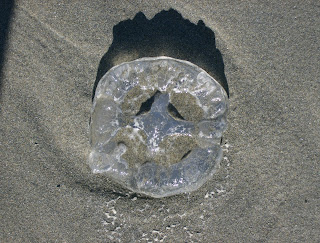 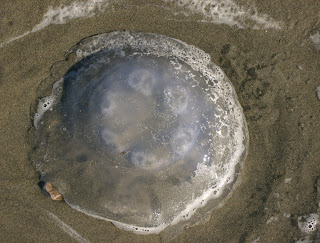 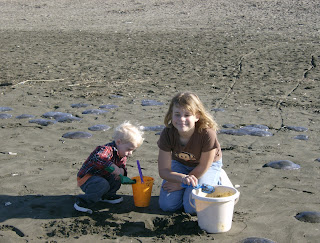 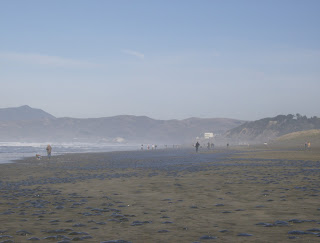 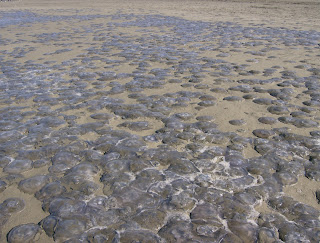 The Boy has taken a liking to crawling into my bed and then wiggling all the way down to the foot and yelling "I'm in a hole." Last week he did just that but instead of yelling his new favorite refrain he fell asleep. Hubby and The Girl spent a good 15 minutes looking for him one afternoon only to find him in his hole snoring away.
This new fascination with blankets, along with The Girl teaching him about cocoons and butterflies, has turned into a new game. He likes to be wrapped up in a burrito cocoon.  Hearing him giggle from inside is too cute. 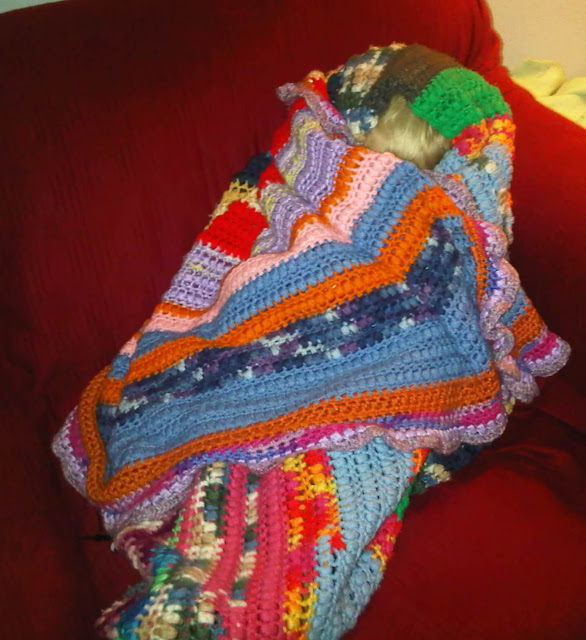 And yes, I made this blanket. A few years ago I started to crochet a blanket using up all the yarn I had left over from other projects. Turns out I didn't have enough yarn to complete the blanket so I went out and bought some yarn to finish it. Funny part (except for Hubby who didn't think it was funny) I had as much yarn left over this project as I did to start with. Comfy blanket, though.﻿
Brought to you by Andrea No comments:

﻿﻿ Conversation this morning -
Coworker H - Andrea Andrea, it's Coworker N's birthday today. We have to do something for her.
Me - OK
Coworker H - We can go to (the restaurant in our building's complex) and get a cake and have some bubbles.
Me - OK

We feel bad that we forgot her birthday. I especially feel like a jerk-face because just over a month ago she remembered mine and took me out to lunch.

Coworker H goes to the restaurant, grabs a yummy cake, throws some bubbles in the fridge. She then sends out an email to a few people on our team and floor letting them know that we'll be having a mini celebration at 3pm.

At 3pm, Coworker K tells Coworker N to come into the bar (yes my office has a bar) because someone brought in some puppies that she just had to see. Right on cue she runs into the bar where 10 of us break into a lovely version of Happy Birthday and present her with yummy cake and sparkling wine.

While we're having cake and enjoying some bubbles, she tells us that our source for finding out when her birthday is incorrect and her birthday isn't until next week. We all felt stupid but enjoyed the cake and bubbly anyway.

Coworker N appreciated the thought, ate her cake and enjoyed her little mini party, even though we lied to her about the puppies.

At least we got to have a nice little 1/2 hour of not working, and drinking bubbles, and maybe we'll get to do it again next week when her real birthday rolls around.
Brought to you by Andrea No comments:

I've been thinking about and working on my list this past weekend. I admit, around list item number 57 I got a little stuck and turned to our friend the google search to find other people who have taken the 101 things in 1001 days challenge, and took a peek at their lists. There were a lot of similarities in everyone's list; lose weight, get in shape, save money, visit far off lands, etc.

One common thread I found bugged me, however. Some people listed items as private.
For example:
...
7. Eat  a Moons Over My Hammy at Denny's once a week for the duration of this project
8. Ride a unicorn through a wall of fire then spend the rest of the day eating ice cream out of a Brian Wilson's orange baseball shoes.
9. (private)
10. make full sized log cabin out of spaghetti and nutella
...

﻿
﻿
Why list (private) things on a public blog? I'm all for making a list of things one has to do, but why even list something that you want to keep private if you're gonna blog about it? Why not just keep a private list of 10 things to yourself and not tell anyone about it. Why say "I have a list of 101 things I'm going to do and not tell anyone about it and my blog posts will look like this:
Dear Blog - today I did Item #9. Or did I? I don't want the blog-reading world to know because it's private." If you don't want anyone to know about it, don't even mention it. Either commit to writing about worms and all, or don't even mention it.

Now I'm off to put reminders on my phone for the things that have deadlines. Phew.
Brought to you by Andrea 1 comment: