Not the Right Size - An Open Letter to Sunset Scavenger


When I was a kid, trash night was Thursday night. Every Thursday it was my job to walk around the house and collect all the trash from the tiny cans in the bathrooms so my dad could take the trash to the curb. We didn't have trash cans; nobody did. We just put the bags on the curb. Then as I got older, the City said we had to have cans. My dad brought home these giant cans, taller than me. They were super thick cardboard with a metal rim. I could never find the right spot to grab them and drag them into the backyard when they were emptied. I usually kicked them over and rolled them into the backyard, hoping that I wouldn't lose control of the cans causing them to roll down the slight decline in the driveway to the street. I'm sure the city I grew up in has city-provided trash bins now, and perhaps even bins to recycle, but when I was a kid, we didn't have them.

Flash forward to present day, we have 3 bins in SF; black for landfill, green for compost and blue for recycle.

It's a well-oiled practice-turned habit that I no longer even think about much. I just do it. 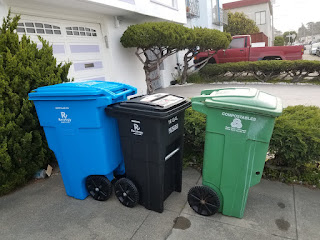 Here is a picture of my trash bins. I am really really bothered by them.The capacity seems to be sized appropriately to my trash output needs. My recycling is really freaking huge, my compost is a pretty good size. My trash bin is a bit small, but when one takes the small amount of time needed to separate one's refuse, one doesn't need a big trash bin.

Not as bad as the stupid-ass cardboard bins with the metal rims I had to fight with every week but sheesh; trash is messy and icky, at least make it look nicer.

When I was in Kindergarten my mom sent me to a babysitter in the morning before and after school. One time her husband took me to school. When we got there I was a tiny bit late; all the kids were already lining up to go into the classroom. My babysitter's husband told me to go up to my teacher and tell her I was tardy. I said I would but I knew I wasn't going to. I didn't want to tell my teacher I was tardy. Being tardy is wrong. I didn't want to get in trouble and I didn't want her to think badly of me. When I got to school I tried my best to blend into the line. I have no idea if she saw me join the line late or not but she never mentioned it and neither did I. As far as I thought, I was home free. She didn't know I was late. Face saved.

My whole life I've been both conscious and conscientious about being late. Being on time is important. Being late is inexcusable.

OK, sure, a big-rig jack-knifed on the road in front of you and the road is closed; your cat vomits all over your keys and you have to wash them off before you use them; your baby has a huge blow-out diaper, up the back, between the toes; someone is blocking your driveway and you can't get out.  All of those are great examples on when lateness is excusable; it's understandable.

What isn't understandable or excusable is being late for being late's sake.

Other people are important. When you make an appointment with them, you are asking them to give up a portion of their time for your benefit. Other people's schedules are created with the assumption that you are going to live up to your part of the bargain and do the thing you said you would do at the time you agreed to do it. When you are late you are disrespecting the the other party or parties involved. You are saying you are more important than them. You devalue another when you are late.

For almost 20 years I was constantly fighting to not be late. I was married to a chronically late person who was completely comfortable with that status. No matter how much lead time we had, no matter what time of day or what kind of event, we were always late. It wasn't because of a mishap or something we couldn't control. It was because the chronically late ex didn't think being on time was important.

Over the years I did my best to manage the lateness; making sure the kids and I were ready long before we needed to be so ex could get ready without any hurdles or telling ex the event started 30 minutes before it actually did. It worked with varying degrees of mild success.

Now almost 4 years of being single, the stress of not being on time has manifested itself in a strange way. I am super conscious of the time, where I need to be and when. I've taken to setting alarms on my phone with reminders to do things, when to leave so I can arrive on time. Some nights I get really bad alarm clock anxiety and wake up in the middle of the night to see if my alarm is still set. I'm early for everything and apologetic when I am late, even when I can't control the circumstances.

I realize this moral imperative of mine manifests itself a bit strongly, but I'm not apologizing for it. I don't like how it's paired up with the divorce PTSD, but I don't regret not being late for stuff. I don't regret treating people with the respect they deserve by being on time and present for the time they've scheduled for me.
Brought to you by Andrea No comments: Links to this post