Where's my Stick? I Have a Dead Horse to Beat.

If I had a secret blog that nobody knew about (hmm, isn't that called a diary?) I would write a post and I would call it "Where's my Stick? I have a Dead Horse to Beat."
So, instead of going on a big rant, I'll just quote a line from Antigone by Sophocles, spoken by Tiresias.
"Nay, allow the claim of the dead; stab not the fallen; what prowess is it to slay the slain anew?"
Brought to you by Andrea No comments:

Our day at the zoo.

﻿﻿Yesterday I took the kids to the zoo  to enjoy the beautiful day. Our journey started out fine enough. We walked our usual route, stopping off at Java Beach for a few sandwiches and some iced tea to bring to the zoo with us. I got my usual, chix salad on sliced sourdough which I shared with The Boy. The Girl got tuna on toast on slice sourdough. We were both a little bit disappointed that one has to have their sandwiches prepared "for here" rather than "to go" in order to get a handful of chips but decided that all in all it's not a big deal. It would be nice, but it's not a deal breaker. When we ate our sandwiches we decided to go halfsies. After tasting both sandwiches, we decided that the chix salad was way better than the tuna salad. We had quite a lengthy discussion on how tuna salad should be made; how much mayonnaise, what size to chop the celery, onions and carrots, whether to include celery, onions and carrots, how much salt and pepper, etc. We decided that tuna is more of a personal dish and the fact that we didn't really care for their tuna wasn't because they didn't make a good tuna sandwich, they just didn't make it to our own personal preferences. It's sort of like when you're at a salad bar. The salad you're making is super fantastic delicious, but the salad the person in front of you is making is super yucky and you can't imagine why anyone would find their choice appetizing.  You're presented with the same choices but the combination in which you put them in your clamshell is reflected in your personal likes and dislikes. I think that putting walnuts, cranberries and blue cheese is delicious on a bed of field greens. Your choice of cornichons, kidney beans and hardboiled eggs on iceberg, smothered in Ranch dressing really grosses me out. It's not really wrong that you like that combination, I just think it's gross.
Anyhow, we got to the zoo safe and sound. After dodging the poor saps who have to put on a fake smile and try to get people to pose for pictures that you can purchase on your way out (we try to be nice and say 'no' politely, though. it's gotta be a soul-sucking job), we headed to the children's zoo. The Boy says he likes to go to the petting zoo but most of the time he doesn't like it and only wants to play with the little tractor or the rakes they have so kids can move poop around the yard. The Girl likes to visit Wakoda, a navajo churro sheep. She likes to go to his habitat and talk to him. She says he listens to her. I'm not sure if he does, but I'm not one to get between a girl and her sheep . . . .
As we were leaving the Children's Zoo, taking our usual route, we stopped by the turtle habitat. We usually stop there and count turtles and make up conversations that they're having. ("no that's my log," "stop basking in my sunshine," "hey, get out of my way. I'm swimming there.") But when we got there there was a little boy about 4 years old running around inside the turtle habitat. He had jumped the rope and was running around inside the habitat. The parents were just sitting on the adjacent bench having a conversation between themselves and not really paying attention. All of the sudden I saw the little boy drop trou and pee inside the little pond the turtles swim in. I said in my outside voice "hey, that's not cool". The parents looked up and saw what he was doing but didn't say or do anything. They just sat there until he was done and when he was done, they just got up and walked away. I tweeted the zoo and told them about the incident, and as they walked past me I told informed them that I tattled. They shrugged their shoulders and walked on. What horrible people. If we still lived in caves or trees they would have been eaten up long ago.
After the children's zoo we headed to the playground. The Girl had a friend who was at the zoo with her family. The Girl met her friend there and I watched The Boy climb to the top of the tallest structure. What a good little climber, scared me half to death. I like the playground at the zoo. Because it's in the zoo there's no dog poop, nobody living in the bushes, no needles, no teenagers sneaking beers, plus the sand is really scratchy so I always walk out of there nicely exfoliated.
We saw the family again at the playground. We gave each other side long glances and stink-eye.
We left the zoo shortly thereafter. The Boy got into his stroller and fell asleep. Because he was asleep we took the opportunity to make a stop at Java Beach on the way home and we got The Girl an ice cream cone. She got the Choc/Van Swirl kind. On the way home we talked about what makes a good swirl on a soft serve cone.
When we got home The Boy was still sleeping. He continued to sleep for another hour, The Girl worked on her homework and I washed dishes.
Except for the peeing on turtles thing, the day was a pretty good one.
Brought to you by Andrea No comments:

This is my Back.

I did it.
Here I am. Hot and Sweaty, but Happy.
And here are my results. 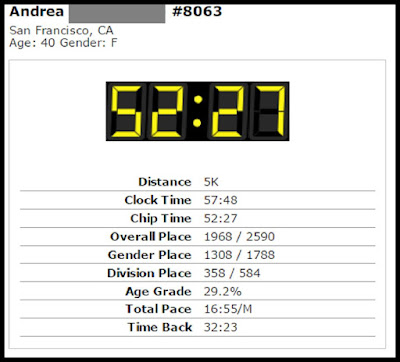 More observations on the race later.
Brought to you by Andrea 1 comment:

In 5 short days I'll be able to cross #35 off my list. I have to say, I'm very excited about it. There were a few weeks where I was a bit sick of training and maybe slacked off a little, but hooray for me, I completed my training, and come this Sunday I will run a 5K.
The great news is that I've already run a 5k. I did it last Sunday. Here's my route. I started at Sloat, at the beginning of the running path that runs along Great Highway, ran to Kirkham, turned around and ran back. Yay me!
Sunday will be a breeze.