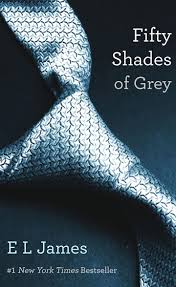 On a recent trip to Target last week I made an impulse buy. I bought the first book of the trilogy 50 Shades of Grey. I should control my impulses a bit better. What a crapsterpiece this book was.

50 Shades of Grey is about this whiny college graduate who meets this rich guy who has certain . . . um . . . . tastes. She decides she likes him and she decides to um . . . taste back.

The guy is super rich and buys her lots of expensive things. She whines about how expensive everything is, but accepts all the gifts anyways. She's got some daddy issues and lets him boss her around.

The guy is supposed to be from Seattle and drinks lots of wine, but there's no mention of him drinking Washington wines. Stupid oversight or conceit by the English author of the book, I think.

In the end of Book 1 she decides that this guy isn't for her, so his chauffeur drives her home.

Overall, I think the book was pretty stupid and I had to push through it to finish it. I don't plan on reading Books 2 or 3 in the series, but I'm sure they're just as lame. I imagine that in Book 2 they get back together, but take the whole book to do so, then in Book 3, some old flame shows up and threatens their relationship, but in the end, it all works out.

A little over a week ago my feet were fat, my toenails were ugly and I was going a little bit stir crazy having not left the house, save for my doctor's appointments. I called a friend of mine and we got ourselves some pedicures and took my mind off of things baby for a little while.

Good timing, too, because the next day I was admitted into the hospital.

My little Chicken Pie was born a week ago.

On Sunday 9/2, I was experiencing some of the things my doctor told me to watch out for. It was decided I needed to go to Labor and Delivery to get checked out. Part of me knew that I was going to be at the hospital until the baby was born. I didn't know I would be having her so soon, however.

My intuition was correct. The doctors decided to keep me. They decided to induce me the next morning. I labored in a relatively uneventful and painless state from Monday morning until Tuesday afternoon. I ate. I listened to music. I watched TV. I saw on the monitors I was hooked up to that I was having contractions, but I didn't really feel anything. About 4pm on Tuesday that all changed when they decided to break my water. At that moment all hell broke loose. I went from 4cm to 10cm in about an hour. The epidural I received right after they broke my water had to be turned off shortly after it was turned on. I pushed for about 5 contractions and like the pop of a champagne cork, my little Chicken Pie made her entrance. 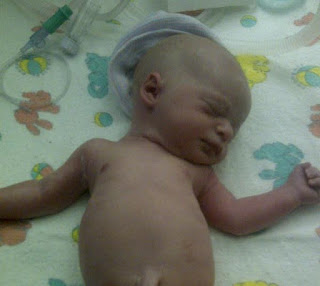 She was 4 pounds, 15 ounces and 18 inches long. She screamed like a velociraptor.  As little as she was, she was healthy, and stayed with me the whole time we were in the hospital. She did have to stay a day longer than I did so the doctors could watch her a little bit, but it wasn't unexpected or surprising given her gestational age.

While in the hospital her daddy, sister and brother visited us every day. 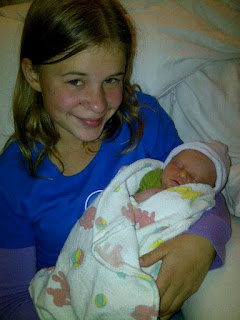 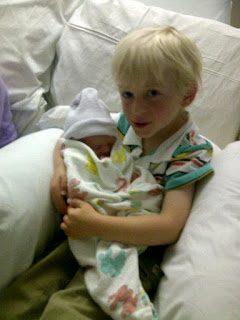 Today we're all at home. Hubby and I are tired, taking turns on feeding shifts, waking her up every two hours to feed her, making sure she keeps her weight on, keeping her happy, fed, warm and dry.

She's a very sweet baby and we're so happy she's a part of our family.


Brought to you by Andrea 2 comments: