Once upon a time, when I was about 3 or 4 years old my mom and I were driving in the car. I was in the front seat, without my seat belt (because nobody in 1974 used seat belts and kids rode in the front seat all the time) rummaging around the stuff that was under the seat and on the floor. I found a medical book. It was some weird cartoon book of the female anatomy. It had cartoon diagrams of breasts, reproductive systems and such.
Having just learned a few terms used by the Vulgate to describe the top half of the female anatomy, I shouted out "Tits. Look Mom, tits."
She looked at me very calmly and said "Andi, I think Jesus wants us to call them 'boobies'." 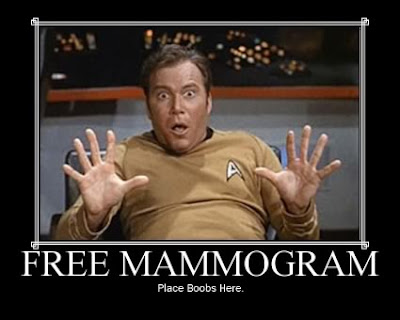 Today is exactly one month before my 40th birthday. Rather than say goodbye to my 30's, I decided to wish my 40's an early happy birthday. Today I had my first regularly scheduled annual mammogram. I had one before about 4 years ago. My doctor found something worth investigating. The investigation (needle aspiration and core sample) found nothing of note that needed to be followed up on (yay). The experience today was a lot easier than the experience 4 years ago. 4 years ago the doctors knew they were going to see something. It was up to them to find out what it was. I was really nervous. Today I wasn't really looking forward to the process, but I wasn't nervous. Sure, it's a little bit uncomfortable being topless in front of a stranger, then getting one's boobs' squished between two plastic plates (take a deep breath, don't move, ... beep), but I was in and out of the doctors office in 20 minutes, and that includes parking, a broken elevator and stopping off at Sugarbowl for a cocktail bun and a cuppa joe.

A small inconvenience to avert a large one, to say the least.
Brought to you by Andrea