What a difference an hour makes.

Oh my gosh I had a long, horrible week at work. I won't go into specifics.It doesn't make sense to go into specifics. Everyone can relate to a long horrible week at work. It was such an icky week that I even had The Geneva Pizza Dream. I have to say, though, overall the good parts about my job outweigh the not-so-fun parts of my job. It was just an off week that I have to shake off and it will be better on Monday.
I am very happy, however, to start my weekend, and I am happier that because tomorrow is a holiday, we got to go home early today.
My long weekend started to look up when I was standing at the platform at the Muni station. Someone tried to pick me up. He was about 20 years old and about 6 feet tall. He was a total gangster looking guy with a giants cap that had a flat brim with the sticker still on it. He was wearing a knit beanie underneath his cap. He had on a super baggy hoodie sweatshirt and his pants were totally sagging around his thighs. Our conversation went like this --
Gangster Guy - Yo yo. Do you like hip hop music?
Me - No
Gangster Guy - Do you want to go out?
Me - No
He walked away. He walked across the platform and approached another woman. Maybe he figures if he asks every woman he sees if she wants to go out, one of them is certain to say yes,sooner or later.

When I got home I sat on the couch started to decompress. At one point I suggested to hubby that we go eat at Off the Grid in the Upper Haight. I have to say it was the best freakin' idea of the century. Our little outing took my mind off my week and totally turned my mood around. We had a really great time.

When we got to the OtG location we took a survey of all the food trucks there. 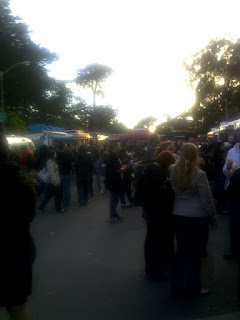 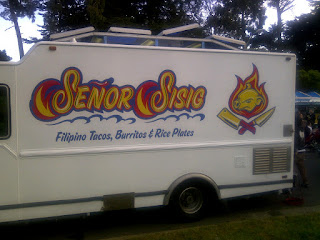 The Girl thought that HapaSF sounded the yummiest. 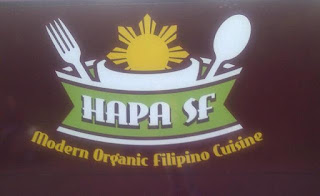 I thought that Seoul on Wheels sounded the yummiest. 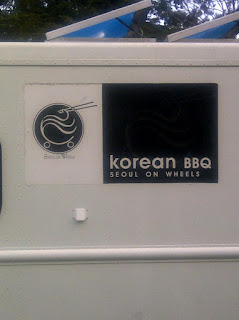 I asked The Boy what he wanted for dinner. He told me sausage and soup. I didn't see any place that had caldo verde so he just had bites of all of our dishes.
When we were just finishing up our dinner we were greeted by people wearing backpacks filled with free chocolate milk. 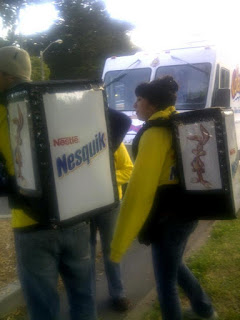 When we were finished we had cupcakes for dessert. 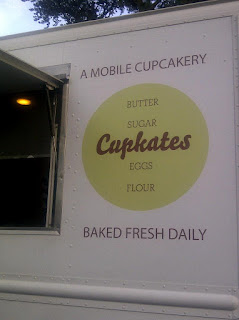 After some running around in the grassy area by OtG, we decided it was time to go home. On the way back to the car, Hubby spotted this bit of graffiti. 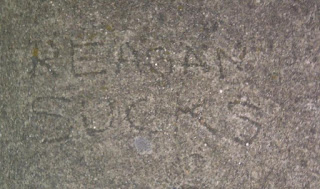 We got home. Hubby popped open a beer. I poured a big glass of wine. The Girl worked on her homework. The Boy walked around the living room in his dad's shoes. Eventually everyone settled down and went to bed, except me. I'm still winding down from a long week and am considering pouring myself another glass of wine.
Brought to you by Andrea