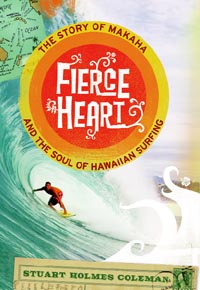 I just finished reading Fierce Heart by Stuart Holmes Coleman. I enjoyed it immensly.
I got the book at a garage sale. The sale was held to raise funds for Surf for Life. You can read about Surf for Life here.
I had heard about the book when it came out in April 2009, but never got around to reading it.
When I first started reading the book I thought that I should have read it before I went on huaka'i last May, but as I got towards the end of the book I'm happy my procrastination paid off and I read it now. Having read it after my trip, I was able to think back at the places we visited, and through reading this book, gained even more understanding, and developed a deeper level of admiration and respect for the people of that area.
Fierce Heart chronicles the lives of modern day heroes and role models in Makaha, HI. A town located on the west side of O'ahu, Makaha has the reputation for being local-centric; a town known for holding as tightly as they can to a culture and a way of life that doesn't exist the way it used to on the Islands anymore. I don't think the people Mr. Coleman introduces us to started out thinking they were role models, and probably for a long time didn't want to be considered as such. They were just normal people living the way they thought life should be lead. But because of the lives they lead, people took notice. They noticed their genuine spirit, their generosity, their honesty. I'm not saying these people were perfect. There are plenty stories in the book where Mr. Coleman writes of fights breaking out, people drinking too much, taking too many drugs, etc. The people he writes about certainly weren't angels. They did, however, have a certain quality about them that made you take notice, and made you want to be around them.
﻿﻿﻿﻿﻿﻿﻿The book itself isn't the best piece of literature I've ever read. Sometimes the sentence structure was hard to follow. It didn't seem to have a very good flow. It was more of a stream of consciousness. I don't think it had to be perfect, though. What I enjoyed about the book was the story. I wanted to learn more about the people in the book. By the end of the book I wanted to be next door neighbors to all of them.