I shouldn't be reading for fun. I should be studying as I have a test next Wednesday that I need to pass. I took it last June and failed miserably. I'm being given a great opportunity to be able to take this test again. I compromised  rationalized that I could read just one of the books and then start the other one on the train ride home from taking my test. By only reading one book I still had time to study for my test, especially since I had been to all the classes, taken the test before AND there are a few full-day review sessions next week before the test on Wednesday.

OK so it was probably a bad idea and bad rationalization on my part but I talked myself out of studying and in to reading my newly borrowed book. BEST DECISION OF MY LIFE!!! 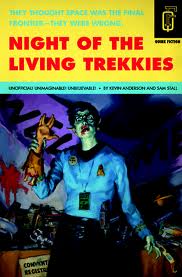 The book I chose to read first was Night of the Living Trekkies by Kevin David Anderson. You can find the author's blog here.

I frikkin' loved this book.

I started it Monday morning on the train on the way to work. By the time the train got to my stop I was hooked. When I got to work I looked it up online to see what was out there about the book. I was super excited to find the book had a movie-like trailer for it. Of course I watched it. When it was over I was even more hooked.

I finished the book yesterday on my way home. I kept waiting for someone to comment on the book and ask me how I was enjoying it so I could tell them the book was really freakin' enjoyable in a loud voice. Sadly, it never happened.

Night of the Living Trekkies is about this guy named Jim who after doing a few tours in Afghanistan decides to get a go-nowhere job in Houston, Texas. There's a Star Trek convention going on. At the start of the convention people who work at the hotel start calling in sick and hotel guests are acting weird and sick. Jim's spidey senses start tingling like something is wrong but he dismisses it. His sister shows up with her douche-bag boyfriend and a few of their friends. After the big Klingon feast funky things start happening. Jim goes into the security office to grab some tasers and a gun. He gets a sense of what's happening, all the people are shuffling around and taking bites out of each other. He finds a woman dressed like Princess Leia chained to a beg, frees her and then the two of them go out and try to figure out what's happening. They meet up with some kid on an abandoned floor, then find Jim's sister and her friends. The douche-bag has gotten way douchier and they abandon him. They find that the zombies had attacked one of their friends. She fights off her inner-zombie and tells Jim what the fuss is all about, then he shoots her. Turns out they aren't really zombies. They are parasites from some alien race trying to take over the world. At the end of the book they kill the alpha-zombie, kind of, and then Houston gets blown up. Lots of other stuff happens, but you get the gist of it. It's a pretty simple story, but super duper fun to read. I was on the edge of my fully-paid for seat on more than one occasion. I would recommend this book to any Star Trek fan, or any Zombie genre fan for that matter, but mostly I think the Star Trek fan would enjoy it more. I said it before but I'll say it again --

I FREAKIN' LOVED IT!

When I finished the book something dawned on me. None of my favorite lines from the book were in the trailer. That's not so weird I guess. I mean I don't think the line "It's raining. Quick, take off your clothes!" was uttered in the trailer for The Perils of Gwendolyn in the Land of the Yik Yak. Then it dawned on me that none of the crucial elements from the book, like how the zombies manifested themselves weren't in the trailer. Not even the main characters from the trailer match the main characters from the book. There was no girl dressed like Princess Leia in the trailer. There's a scene in the trailer when the guy dressed like the Klingon runs around the corner to save the day then comes back screaming like a girl. The Klingon in the book was a big 'ole wuss. There's no big fight scene next to an RV that's tricked out to look like a Federation Starship.
The trailer was really entertaining, and did get me to want to read the book even more, but it pissed me off that it didn't follow the plot of the movie.
Here's the trailer. Again, super entertaining, but different from the book.