Over the weekend The Hubby and I took The Kiddies to a Festa in Santa Cruz. It's an event we go to every year. I'll write another post about it soon.

One of the things the kids look forward to is playing a raffle type game. I don't know what it's called. We call it The Paper Game. For 10 cents each one is given a tightly rolled piece of paper. The paper is unrolled and if a number and a stamp from the Portuguese Hall is present, one wins the corresponding prize with that number taped to it. Prizes are donated by, I'm guessing, members of the Portuguese Hall. The prizes are as varied as they are interesting, fun or useless. We've won things like potholders, crocheted doilies, vases, trivets, water guns. Really, just about anything could be a prize. Unrolling the paper and finding something written inside is just as fun as exchanging that piece of paper for a prize and seeing what you've won. 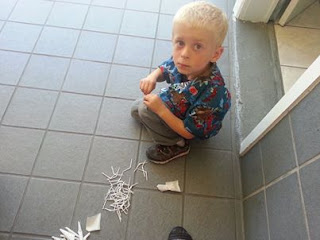 The other day I stacked the deck for The Boy. I bought $5 worth of rolled up pieces of paper. He and I sat down and started unrolling. I noticed I had won three things while he had won nothing. When he was getting down to his last few pieces of paper I rolled one of my winning numbers back up and sneaked it into his pile. When he unrolled it and found his number (301) he was so excited. Watching a 5 year old boy smile and scream "YES" and "SWEET" and "OH YEAH" is just about the best thing ever.

We went over to the prize booth and turned in our numbers. It turns out I gave him just the right number. I turned in my numbers and got my prize; two dish towels from crate and barrel. The Boy turned in his number and won . . . . . 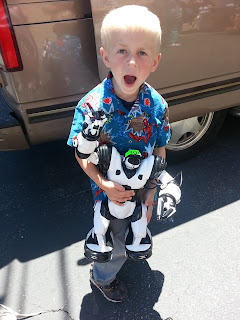 Email ThisBlogThis!Share to TwitterShare to FacebookShare to Pinterest
Labels: stacking the deck