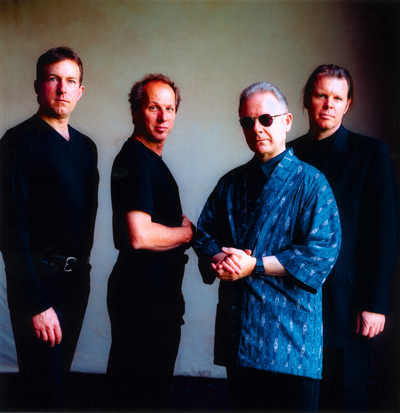 A bunch of Hubby's New York cousin's picked me up and drove me to a dinner theater where we sat at a really crowded table, ate dinner and saw King Crimson play. When the show was over I had to pee really bad. I debated just holding it because I didn't want to miss my ride, but I decided to go to the potty anyways, and to my delight and surprise, all the cousins were waiting in line for the bathroom as well. I wouldn't miss my ride. Yay. Then I was standing outside the car, waiting to get in and Adrian Belew was standing outside. I said "Hi Adrian, good show." He smiled and got in an elevator.

Then I was in a car with Bean, The Boy and one of Hubby's cousin who shares the same name as me. In part of the dream I was driving her to BART so she could go to the Oakland airport. She wouldn't just let me drive her to the airport. She had to take BART. In the other part, we were looking for a new couch with seatbelts to fit into the back seat of the car. We found a pretty cool couch in an abandoned tiny-house, and it had seat belts. Yay us. Then I drove her to BART and took Muni home.