Conversation I Overheard Whilst Peeing 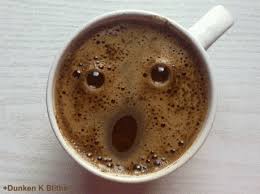 I get it. There are people in this world who don't like coffee. I am not one of them. I love coffee and I drink it every day. I have a cup in the morning and then I usually have a cup when I get to work. On occasion I will get an additional cup. I don't love coffee enough to drink decaf, though. Seems mostly pointless. I don't drink coffee just for the taste. I also need the aroma, the warmth and, let's face it, the caffeine.


So this afternoon I was in the ladies room.. Two women came in and chatted while they were peeing. First it bothered me because I hate it when people talk to me in the bathroom, so in my head it should bother everyone else, too and they shouldn't do it.


Then I started listening to the conversation. They were complaining about one of their co-workers.
This co-worker had a headache and mentioned she should probably have a cuppa joe because she hadn't had any coffee that day.


These two women thought her logic was so stupid. Why would anyone drink coffee when they have a headache and how is it that there's a correlation between a lack of coffee consumption and a having a headache? She should just take an aspirin. That's what will get rid of her headache. She's just stupid for drinking coffee in the first place.


I waited in the hallway, pretending to be talking on my phone so I could see who these girls were. 20-ish hipster girls. Go eat your $10 toast and drink your kombucha, hipster. I'll be with the normal people drinking coffee.


Brought to you by Andrea

Email ThisBlogThis!Share to TwitterShare to FacebookShare to Pinterest
Labels: conversation