I grew up watching a freaking lot of TV, like a lot, a lot. Like getting the TV guide and highlighting what I was going to watch an reserving the TV for specific time slots by shouting to my family "I get the TV on Friday night at 8pm." This would usually be followed by something like  "Your sister already reserved it. Is it for the same thing?" If it was, then no problem, but if it wasn't, then an argument would ensue. "But she got it last Friday at 8pm. We have to take turns." or "But I reserved it for 'part 2' and I can't miss it" It would usually work out in the end with one of us having to watch whatever it was we wanted to watch on the little black and white TV in my parents' bedroom. Then there were things that were always a standing TV appointment like The Love Boat, Mork and Mindy, anytime The Wizard of Oz came on.

Nowadays we have tons of screens to choose from. One evening in particular I noticed that my 3 kids and I each had some sort of screen under our personal control, be it a phone, an ipad, a computer or the TV. We were all together, but each of us was immersed in our own world free to explore Mimaloo or Ponyville, punch trees with Steve, watch Buffy slay some monsters or play candy crush until our eyes bleed. I try to monitor how much screen time we use. Some of it can't be avoided, but aside from homework, the computer is just a supplemental entertainment machine. With so much to choose from, and that weird feeling that, at least I get sometimes, that I think I'm going to miss something if I turn off the TV, it's hard to slay the screen dragon.

Anyhow, as bad as I am with the TV and other screens being on before dinner, I am super happy and quick to turn off the TV in the evening. Sometimes I turn it back on after the kiddies go to bed, most of the time I keep it off.

Last night I turned it back on. Flipping through netflix I found a movie "Special Correspondents." I have to admit and didn't read the plot summary or anything. I saw the little icon next to the icon for Idiot Abroad and thought "ooh, Ricky Gervais has a new series where he has a special correspondent. I turned it on. I quickly realized I was watching a movie, rather than a TV show. I decided to just go with it and watch the movie.

I'm so happy I did. I like Ricky Gervais stuff. I like the N song he sang on Sesame Street. I love Derek. Some of his stuff is kind of heartwarming. I like that side of him. I don't like everything about him, and my tolerance for his laugh is not so high, but I like a lot of his projects. Idiot Abroad was rockin' but I didn't like when Warwick Davis joined. I don't think Carl needed supervision. I would like to see more of Warwick Davis in another project, though. That would be fun. Ooh, did someone just say Buddy Movie? They could remake Night Shift (the movie with Henry Winkler and Michael Keaton). 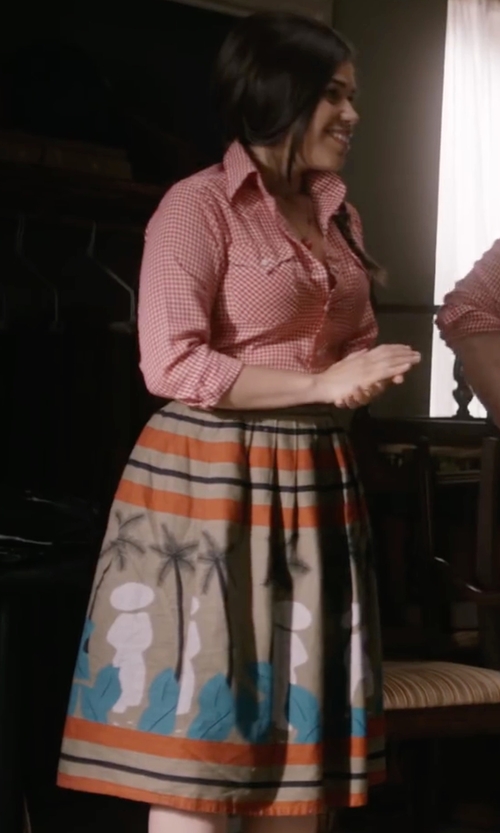 Anywhoozle, Special Correspondents was really entertaining. I loved America Ferrera in the movie. She wore the best skirt. I spent a few hours online looking for it. No dice. Here is what it looks like. I want it.

(Spoilers below)
The movie is about these two guys who work for a radio station; one is a reporter, another is a technician. They get sent to cover a civil war in Equador. On their way to the airport they lose their tickets and passports. Rather than go back to the office and take their lumps they decide to hide out and do their reporting in a friend's attic. Of course it all backfires on them and they end up sneaking into Equador, but in the end nobody ever finds out they made everything up and they totally get away with it.

It was a super fun movie to watch; I even cried a little bit. If you see it in your Netflix feed and you want to watch a movie you will super enjoy and won't have to pay close attention to, you should see Special Correspondents.