I was probably about 10 years old. My mom took me to the Hallmark store at what was once Los Altos shopping Center in Long Beach. She stayed outside the store while I went inside and looked around. I found the perfect gift for my mom. It was a yellow Snoopy wallet. I remember overhearing how she needed a new wallet and for some reason I had it in my head that she really loved Peanuts. I ran outside the store very excited about the wallet, told my mom how much her Christmas present would cost. She gave me the money and I went inside and paid for it. 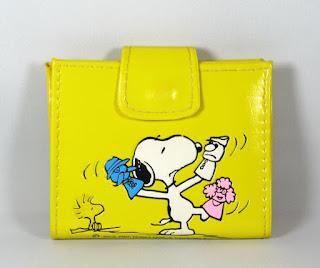 Later when I was at home I showed my sister the wallet. I was so proud of myself for getting my mom such a fantastic gift. How could she love the gift? It was a bright yellow wallet with Snoopy on it. My sister and her friend laughed and told me it was a kid's wallet an my mom would never like it. My excitement suddenly turned went all pear shaped.

On Christmas morning I woke up dreading when my mom would open her present. Sure, I was excited to open presents and such, but I was really concerned my mom wasn't going to like the gift. I hid it under the Christmas Tree skirt, then when there were no more gifts to open save for the boxes of candy my mom would get from her patients and clients at work, that she would never ever open because she knew what was inside, so they just sat there, wrapped, uneaten until after Christmas, I took the wallet, unwrapped it and showed it to my mom. She saw it and said "That's cute, who gave you that?" I burst into tears and told her that I bought it for her, but my sister and her friend (who my dad always called Samantha, but it wasn't her real name) told me she wouldn't like it. My mom hugged me, told me she liked it and then used the wallet until the wallet died, which was probably only a few months; it was really small and made of plastic.

Still, she used it until it could no longer be used.

Merry Christmas.
Brought to you by Andrea