Monkey Boxes - All In My Head 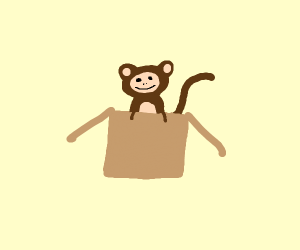 When I was in the first and second grades, I went to a babysitter in the morning and afternoon.
I would walk to and from school with a group of kids, mostly the same age as myself. There was this kid, the same kid whose spanking I had to listen to in the first grade. He taught us a a more elevated game of "step on a crack, break your mother's back."

He taught us Monkey Boxes.

Along our route to school in the squares of concrete that made up the sidewalk, a good number of them had a "+" sign in the corner. This kid called them Monkey Boxes. Upon coming upon a monkey box, the only way to pass it, was to jump over it. You couldn't walk around it, you had to jump over it. You could, however, if there was a tree root breaking the cement, jump upon the root to get across, but only with one foot, it was only a stepping stone (stepping root?) to aid you in your passage; it was not a spot to linger.  There was no real penalty to not being able to jump the entire box. You tried your best to jump over and every day tried a little harder to get across; to play the game, you just had to try. Once you did get across, however, you were met with cheers, and hearty slaps on the back.

I grew up thinking (nay, knowing) that monkey boxes were a thing, a real thing. They're all over Long Beach and easy to spot once you set your mind to it.  I also grew up thinking that the knowledge of Monkey Boxes was just as universal in childhood experiences as putting black olives on one's fingers at Thanksgiving. As I got older, however, I realized that Monkey Boxes were a small, localized game that only a handful of kids played, and nobody but me remembers it anymore.

I taught my kids about finding Monkey Boxes. They know where all the best ones are in our neighborhood. We've even found a few Monkey Curbs down by the playground.
Brought to you by Andrea