Lychees - A True Yet Pointless Story 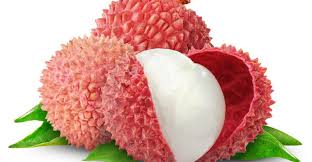 I saw this article yesterday that there are now seedless lychees. I would like to give them a try. I have a feeling though, that they are going to be just as yummy as a seedless watermelon, in that they will still be good, but something will be missing. Although the seeds do get in the way, they seem to encourage the production of better flavor within the fruit, a necessary evil perhaps.

Anyhooozle, when I think of Lychees I think of this woman I used to work with many moons ago at a company that specialized in selling 6' tall wooden giraffes and had a wall of sample sized foreign snacks. She grew up in China. She said she and her brother would pick bags and bags full of lychees and then their mom would throw them in the freezer and they would have lychees all year round. She had lychees every day. Lychees eaten plain. Frozen lychees. Lychees fresh from the tree. Lychees thawed out. Lychee in bread. Lychee in stir fry. Lychee in dessert. Lychee sherbet. Lychee jello (now *that* sounds really freaking refreshing). OOOH! Lychee Agua Fresca sounds delicious.

If given the opportunity to taste a seedless lychee, I totally would. Until that time comes, however, I will stick to the regular kind with little to no complaint.