The text below was taken from Constellation Wines website. I didn't write it. I will however write this: Jose was a very nice man. I'll miss him around the office. 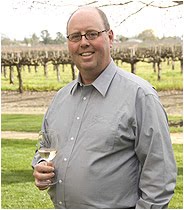 José Fernandez III, a highly respected wine industry executive, passed away on
January 1, 2010 after a fourteen month battle with brain cancer; he was 54. As chief
executive officer of Constellation Wines North America, Mr. Fernandez led the North
American business of Constellation Brands, Inc. He has been an officer of the
company since 2003.
Mr. Fernandez, a 31 year wine industry veteran, was appointed chief executive officer
of Constellation Wines North America in July 2007 and has served as president and
chief executive officer of Constellation Wines U.S., Inc. since December 2003. Mr.
Fernandez also served as president and chief executive officer of Pacific Wine
Partners (a previous joint venture between Constellation and Hardy Wine Company
Limited) from 2001 until 2003 and as chief executive officer of BRL Hardy North
America from 2000 to 2001. Constellation acquired Hardy Wine Company Limited in
2003. Mr. Fernandez played a key role in the rapid growth and development of
Constellation's wine business, including the acquisition and integration of the Robert
Mondavi Corporation, Vincor USA, and Fortune’s U.S. wine business.
Previously Mr. Fernandez was president of Southcorp Wines North America from 1992
to 2000. Prior to his role at Southcorp, Mr. Fernandez was senior vice president of
marketing at Vintners International. He started his career in the wine business with the
Kobrand Corporation after graduating first in his class from Pace University in 1978
where he received an MBA in international business. José also attended the Juilliard
School where he studied orchestral conducting, and Fordham University.
José lived life intensely, grasping every opportunity and adventure in his path. Whether
he was running the marathon in Big Sur; enjoying the symphony in Sydney; tracking
down his ancestors in Spain; tasting tea in China or just returning home to his family in
Pacific Grove – every day presented infinite possibilities.
José viewed the world through a magnifying glass and a telescope. While he
appreciated the immense beauty in life's simplicities, he also crafted larger-than-life
goals and skillfully navigated his way to their fruition. The wine industry proved the
perfect vehicle for his life’s work. He was intrigued by its global complexities, yet
stayed true to the essence of wine. He celebrated life, and his greatest pleasure was
sharing it with others.
José was born and raised in Brooklyn, New York and most recently split his time
between Rochester, New York, San Francisco and Pacific Grove, California. He is
survived by his wife Kathy Morell; his children José Fernandez IV, Carla Fernandez,
and Claire Rosburg; his siblings Thomas, Elizabeth, and James Fernandez; and his
parents, Arlene and José Fernandez.
Public "celebrations of life" will be held in Napa Valley and Rochester later this month.
For details visit www.cwine.com. The family has requested that in lieu of flowers,
donations are welcome to the American Brain Tumor Association (ABTA.org) and the
National Hospice Foundation (www.americanhospice.org) or your local Hospice.
Brought to you by Andrea