It's better to lose track of a spider than to kill a spider.

I spent part of last week at a Napa hotel for a company-wide meeting.

As I was walking back to my room one night the biggest spider attempted to cross my path, but stopped short when he saw me. Its body was about penny in circumference and about quarter-size if you were to account for his legs. He had a big round abdomen shaped like a black widow but he was kinda brownish/black with lots and lots of yellow dots all over him. He had come out of the low lying flower bed and it looked to me that he was attempting to cross the walk-way and go into the adjacent low-lying flower bed. I tried to take pictures of him but all of them just looked like a blurry thumb. 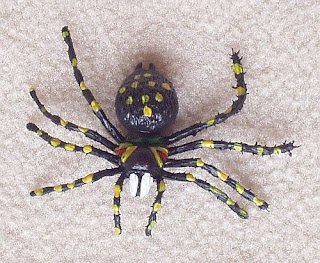 He was pretty cool looking. I tried to find a picture of one of his bretheren online to figure out what he was. All of my research, which consisted of searching for about 10 minutes, came up with this. I think he's a variety of an Orb Web Spider.
(I have to note that looking at spider websites to find this spider made me feel really creeped out and now I'm all itchy.)


Anyhow, the next day I boarded a coach that was going to take me to various winery and vineyard locations for a day of education. There were two people, a man whose name I don't remember and a woman who works in my office named CV, sitting behind me that were talking just about the whole way there and back.

The woman told the man this story,
CV and her Hubby used to live in  this one house. Her Hubby has the reputation for taking exception to the killing of our arachnid friends. A spider had taken residence in an unused corner of their house. I'm not sure where in the house but let's pretend it was in their living room to the right of their sofa, and it had a pretty good view of the outside world, and an even better view of the TV. The Hubby didn't want to kill the spider, and it didn't really bother CV so they just left it there. Once in a while they would prune the web so it wouldn't get out of control but for the most part they left Mr. Spider alone.
Then the time came for CV and her Hubby to get a new house. Don't know why they moved from one house to another but for the purposes of this story it doesn't really matter. It dawned on the Hubby that once they moved the new occupants of their former home would probably kill the spider, not knowing the spider's history and the good mojo that surrounded it. Feeling a connection to Mr. Spider, the Hubby put it into a jar and transported it to their new home hoping it would find the same happiness it had found at the old house. Soon after, they lost track of the spider. I'd like to think that the spider crawled outside to enjoy the bigger world, scurried off into the sunset and died a happy spider. I'd also like to think that CV and her hubby think about the spider from time to time and smile.

Now, I've never met the Hubby, and I've probably only had about 7 conversations with CV, mostly having to do with the weather or how our weekends were, in the 4 years she and I have worked for the same company but I've always thought she was a friendly person and I liked the chili she made us all try when she was entering some chili cook-off competition. Hearing the spider story, though, made me like her a little bit more.
Brought to you by Andrea