The Boy's Brother - A Contest

This morning The Boy was telling me a story all about his brother.
The Boy's description of his brother was so detailed and fantastic that
1) it totally made my day to hear him describe it, and
2) I wish I could draw so I could have on paper what it looks like.

I know that there are plenty of you that can draw better than I can so I'm having a contest.

Here's the contest -
I'm going to describe what The Boy told me about his brother, and you are going to create an image of him.

Here's the Prize -
The prize for the best entry will be, ummm, something I have thought of yet, but mark my words,it'll be great (at least according to me.)  It'll be a physical object I will mail to you (or give to you if I know you and you live close) and only slightly more valuable than bragging rights. In other words, I might make something or give you something I have in my house but am not going to spend any of my own money on it, PLUS I'll announce the winner on my blog, thus ensuring your place in the pages of my blog, if not my heart.

How to Submit -
Submissions should be either given to me directly if you know me and see me often enough, mailed to me if you know my address (which I'm not posting so you'll just have to know it already) or emailed to hulasunset@gmail.com. Submissions should be received no later than my level of tolerance for receiving submissions. In other words, when I feel I'm done taking submissions, I'm done, and the contest is over. If you see that I've posted the winner's entry on my blog, you can take that as fact that the contest has ended. If I tell you the contest is over, it's over. If I decide it's over and don't tell you it's over, it's still over. Contest ends at my whim.

Submission Description -
You can submit a photo, a painting, a drawing, a collage, a sculpture, shoebox diarama or anything else along those lines.

The Description of The Boy's BrotherI'm not sure if it was his little brother or his big brother. The Boy wasn't too sure either. He also wasn't too sure if I was his brother's mother, but maybe I was. It didn't seem to matter to him. It was his brother nonetheless.
His Brother is a wolf.
He has a tail where his nose should be.
The Wolf is brown, like The Boy (which is super funny because The Boy is a blond-haired and blue-eyed. He's beige if anything, but I couldn't change his mind. His brother was brown like him.)
His butt is in the middle of his shoulder blades, so is his nose. His butt and his nose share the same hole and it's located on his back between his shoulder blades. To poop, he sneezes out his backhole. He poops on leaves that have fallen from trees. The Boy demonstrated this for me. It' looked a lot like "banana" from "Superman / Banana" from Tony Horton's P90x series. See pose below of some woman demonstrating"banana." 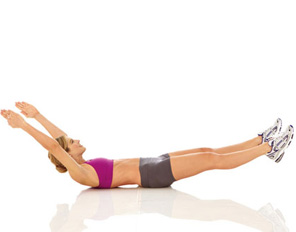 The Wolf eats what all wolves eat which is a steady diet of dead cats and spiders (either live or dead, The Wolf does not discriminate.)
He is very nice, and a very good brother and he's nice to our cat, but the cat has to move away and go live with The Boy's girlfriend named Summer (not sure if Summer is real or not.)
--End of Description.


Happy creating everybody. I can't wait to see what y'all come up with.

Email ThisBlogThis!Share to TwitterShare to FacebookShare to Pinterest
Labels: contest