I read The Hunger Games a few weeks ago, all three books. 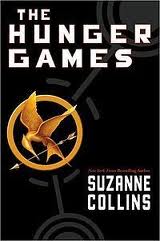 I think I took a bit longer to read it than most people. Most people I've heard about reading these books tore through them. The Girl tore through them pretty quickly. I tore through it, kinda, but it wasn't because the story was so gripping I just had to read more. I read through it quickly because it wasn't too difficult a read. I mean, it wasn't like trying to get through Moby Dick or War and Peace or anything.

I thought the premise was interesting and I hadn't read anything quite like it in a while. Overall, it was a fun book to read and a nice diversion to get me through my commute to and from work.

It's about this girl who lives in a North American type area, except it isn't the USA. The government has totally taken over and all the districts, sort of like states, and they exist to keep the capitol happy, entertained and well stocked. To keep the districts down, they make the teenagers kill each other and everyone has to watch. This festival of dying teenagers is called "The Hunger Games."

This girl takes care of her mom and sister, kills animals for food and hangs out with this guy who pretty much does the same thing. She's good with weapons, he's good with traps. He digs her, but she's wishy-washy and doesn't know if she likes him back. Her sister is chosen to compete in the Hunger Games and she takes the sister's place. There's another person from her district that is chosen to compete. Over the course of the game they become friends with benefits but surprise surprise, she can't decide if she really likes him or the other guy. This theme is played out throughout the series and it gets tiring. Choose already. Cut one or both of them loose. In the end one of the guys chooses for her, says adios and gets work in another district. My guess is that he finds someone less whiny. She chooses the other guy because he's a sad sack who stays behind and by her side.

Oh and in the course of this girl whining about her boy troubles, she manages to kill a few people, befriend an alcoholic, stay alive, start a revolution and topple a government.