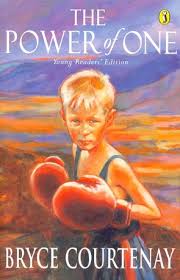 I just finished reading The Power of One by Bryce Courtenay.

I really enjoyed the book but at the moment I'm a bit mad at the estate of Mr. Courtenay and Ballantine Books.

See, I bought the young adult version, not the full version. I'm so mad. I feel duped. I want to read the whole thing but that would mean having to buy the book again. I'm afraid if the estate of Bryce Courtenay and Ballantine Books want me to find out what happened to Peekay, they're going to have to get me a free copy.

The book chronicles the life of a boy named Peekay. He has a pretty hard life in 1930's and 40's South Africa. He makes some interesting friends during the book that shape his life and his world view.

The book started out pretty grim. A little boy is sent to boarding school. He is the only kid of English descent there and gets hazed a lot. Throughout his life he meets people that guide, mentor and influence him. They teach him to stand up for himself and for others. They teach him to be confident in his convictions. He also learns, however, that life is not fair.
At the end of the version of the book I was reading Peekay is heading off to college. I felt cheated that the book stopped so abruptly. I wanted to read about how he got on in college, who he befriended and what kind of hardships he had to overcome, but noooo, I had to buy the condensed version.

Not cool, Ballantine Books and the estate of Bruce Courtenay. Not cool for making a shorter version. Pages upon pages were spent in this book telling the life of this little boy who appreciated when he wasn't talked down to and who proved he could learn 3 African languages, Taal, Latin and play the piano, and Ballantine Books thought it was a good idea to shorten it to a mere 222 pages, thus talking down to the young adult?

I'm going to keep whether I liked the book to myself. I was looking forward to how Peekay's life turned out and that a shorted version exists and I bought it on accident has spoiled it for me. If Ballantine can't give me access to the whole book I'm not going to tell them how much I enjoyed this story.

On another note, this book was turned into a movie, but I havin't seen it. If I had netflix I could rent it, but I don't. If I get the chance to see it, I will and update this post.
Brought to you by Andrea

Email ThisBlogThis!Share to TwitterShare to FacebookShare to Pinterest
Labels: book, books that were turned into movies