Reeboks and Burgers - A Dream

Have you ever broken up with a friend?
I have once. I did it badly. It was messy. 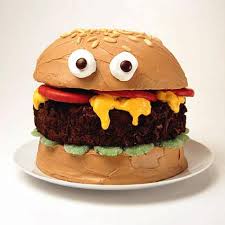 I knew this woman. For a while we were kind of good friends. We worked together. We saw each other every day at work. We had lunch together just about every day. We hung out outside work as well. There was something about her, though, that left me feeling negative and drained.
Not really knowing if I wanted to cut off all ties with this woman I decided to take a little break from her.  She was a real negative influence on my life. It took her absence for me to realize that. I decided a break up was in order. I broke off all contact possible. I still had to work with her, though.

After about 6 months, our friendly "good mornings" turned into snide eye contact. We tried to ignore each other completely unless there was a chance that she or I could throw the other under some kind of oncoming bus. We were playing a super passive-aggressive Spy vs. Spy game that I was determined not to lose. I definately did not handle the situation correctly. While I don't think she would have responded well to the "we have to talk" talk, I still could have done things differently.

Then one day she left the company. For a few months I would see her on Muni as she had found work in the same neighborhood as our place of employment. Sometimes we'd say hello and sometimes we'd pretend we didn't see each other.  I haven't seen or spoken to her in years. We have no common friends so I don't know what she's doing these days.

I had a dream about her last night. Strange because I haven't been thinking about her. It was a work dream.

We were working at Hof's Hut, (which is a restaurant / hamburger joint / trying to be fancier than it is, but the burgers are pretty good kind of place. I worked at one of their locations when I was 19).
In my dream I couldn't get the time of my shift right. I always had conflicts with the time they wanted me to work. My x-friend kept taking all the good shifts, wearing super white reebok tennis shoes which for some reason really rubbed me the wrong way. She kept getting in my way and I couldn't serve my tables. I threw up my hands, said "fine" and left the restaurant, but not before pouring a glass of apple juice down the vent slats in her locker.

I wonder why I dreamed about her. I wonder why in my dream I let her best me. Do I have some unresolved issue with her? Do I have some unresolved issue with any of my current co-workers? I am feeling a bit stressed about a particular situation at my current job, but it has nothing to do with any conflict with anyone. I do feel bad with how we stopped being friends, but I'm not sorry we don't hang out anymore.

hmmmmm
Brought to you by Andrea