Last week I read a status on my Facebook page. The writer of that status stated she hated a book called The Humans by Matt Haig. I decided to look up the book and see what it was all about. Sounded right up my alley; a book about someone trying to figure out an unfamiliar situation. There's math and science in it, but not so much I don't understand the concepts. There's romance, teen angst, and a bit of humor. I went online, placed a hold on it at the library and waited for it to show up at my local branch. I picked it up on Saturday and finished it last night. 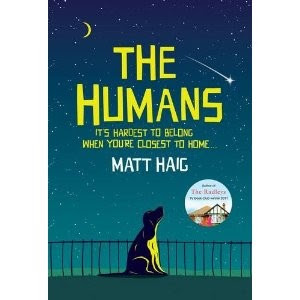 The Humans is about this guy from a hyper-intelligent species from outer space.  This spaceman comes from a species who never die, know no pain, love, joy, heartache, etc. They have no relationships with each other. There is no sort of bonding with anyone. Logic rules their world and dictates how they live.

In the book the spaceman has to go to Earth and kill a mathematician who solved some math problem involving prime numbers. After killing him, he takes his form and sets to complete his mission by killing all those who might know about the mathematician's discovery.
While discovering who knows what, he gets to know the mathematician's wife, son, best frenemy and best friend. He kills the frenemy, but as he's trying to suss out what the wife, son and bestie know, he gets to know them and like them and their dog. He falls in love with the wife and builds a relationship with the son and starts walking the dog.  He doesn't want to kill them. The spaceman's bosses get angry. In the end he decides he wants to stay human and live painfully ever after.

Like I said, the book seemed right up my alley. I was a little bit wrong. The story itself is pretty entertaining. but it was lacking and I felt like it wasn't all that original. It was sort of like a cross between the writing of a lazy man's Douglas Adams and that poem / speech that was popular in the early '90's about not forgetting to wear sunscreen, with a little bit of Desiderata thrown in for good measure.