The Pitfalls of Marriage

I've worked at a lot of restaurants.

When I was 17 I worked at a restaurant called "Skinny Haven." The restaurant no longer exists. It was basically a Weight Watchers restaurant. All of the menu items had exchange counts listed (this is when Weight Watchers used exchanges instead of points). On many mornings before the restaurant opened there were Weight Watchers meetings. After the meeting everyone would step on the scale then take a seat in one of the booths and order breakfast. Since the restaurant doesn't exist anymore, there isn't a website to link to, but I found this restaurant review. In it the reviewer calls the place a "health-conscious restaurant." Everything came to the restaurant (mostly) pre-cooked and pre-packaged. The cooks would unpackage all the meals and assemble according to the pictures they had pasted to the walls inside the kitchen and pop it in the microwave for a pre-specified amount of time. It was all flavored with artificial seasonings, sweetened with artificial sweeteners and filled with artificial flavors. Sure, everything was low calorie, but that was the only thing it had going for it. Low Calorie foods was the goal, not food rich in protein and nutrients our bodies need. The ice cream they had, I have to say, was kinda good, but it was in no way good for you. It was dehydrated non-fat milk, fake sweetener, flavor and water that was frozen and whipped together to a sort of soft-serve consistency. Nothing, save for the actual vegetables on the salad bar was good for you. After Skinny Haven I got a job at a restaurant near the Queen Mary called The Reef. I didn't work there very long. I showed up for work one day and the place had burned down. When it was rebuilt I wasn't rehired. Turns out The Reef had seen more than a few fires in its day, only to be rebuilt and re-opened with new management and a new staff. I also worked at El Torito and a hamburger joint called Hof's Hut. Hof's had pretty tasty hamburgers. One time while working there I licked a piece of lettuce on a salad and gave it to a customer I didn't like. Then when I moved to San Francisco I got a job at a pizza place that has since closed. I've written about that place before. Worst job on my psyche ever. 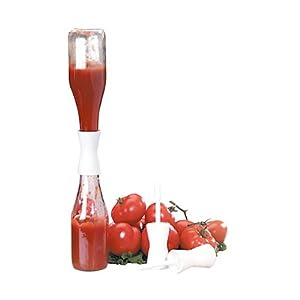 All of the restaurants were different from each other. All had their own charm (or lack thereof). They all had one thing in common, though. At every restaurant, part of my sidework was to marry the ketchups. It was so gross. We had to balance a 1/2 full ketchup bottle on top of a 1/2 empty ketchup bottle and turn them into one full ketchup bottle. It didn't matter if they were different brands. It didn't matter if they were different ages. At the end of every shift, all of our ketchup bottles needed to be full so that the next day every customer could have a full ketchup bottle on their tables. Sometimes we'd use a little hot water from the coffee machine to loosen up the last bits of ketchup in the bottle. Sometimes instead of playing the bottle balancing game we would use a ketchup funnel. Sometimes the ketchup would be so old that it would ferment and explode a bit when opened. I hated marrying ketchup. And it wasn't just ketchup. We had to marry a whole host of condiments; mustard, mayonnaise, A-1 Sauce, hot sauce. And sometimes, when there was no more ketchup (or other condiment) to marry, we would open a #10 can (or giant tub) of the necessary condiment and pour brand new condiment in the old condiment container. We never washed any of them, save for the lids which we soaked in hot water to get all the dried crud off while we were marrying the condiments.

So this morning I went to the cafeteria in my office complex to get some eggs. You can get two scrambled eggs and bacon for $3. It's a pretty good deal. After I paid I went to the condiment counter to sprinkle some yummy Tapatio  hot sauce on my eggs. I had long suspected that this place marries their condiments and today I got my confirmation. In marrying the hot sauces, they neglected to put that little plastic insert back in the bottle, you know, that little piece of plastic that makes the hot sauce come out in measured drops. I ended up dumping 1/2 a bottle of Tapatio on my eggs. 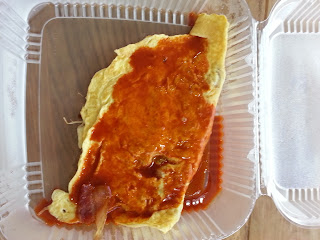 Man, that sucked. I knew I should have gone for the Cholula.

Email ThisBlogThis!Share to TwitterShare to FacebookShare to Pinterest
Labels: Geneva Pizza Dream, The Way We Eat