Spending Time With Mr. and Mrs. Carter - A Dream

I had a dream about Jay Z a week or so ago but I didn't write about it. Last night I had another dream about both Jay Z and Beyonce. I guess the universe is telling me I have to write about them now.

I was at work about to enter the elevator. I got in. A lot of people from the 7th floor of the building were in the elevator as well. I pressed the button to my floor and immediately someone cancelled that floor and the elevator went straight to the 7th floor. That wasn't fair, I thought. Then the elevator went all the way down to the first floor and picked up more 7th floor-ers. Again I pressed the button for my floor. A woman from the 7th floor again cancelled my floor. I pressed the button again. She cancelled it again. I pressed it again, she cancelled it again. I looked at her and said "What gives, Lady?" She told me that Jay Z was going to perform in their office later today and they needed to make sure everyone who was supposed to be at the show was there and those who weren't supposed to be there weren't. She also didn't want Jay Z to have to stop at different floors before he got to the floor where he was performing. I told her that her logic was stupid. By not letting me off on my own floor, what's to stop me from getting off on the 7th floor, and why couldn't she stop on my floor right now? Jay Z wasn't even on the elevator. He wasn't scheduled to be there yet. 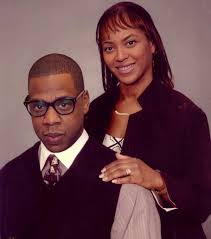 My oldest daughter and I were in the living room of the house I grew up in. Beyonce was sitting on the couch with her arm on the arm and her hand supporting her head. Jay Z was standing behind me leaning against the 3-sided fireplace. Beyonce said hello to my daughter and asked her if she had a boyfriend. My daughter told Beyonce it was none of her business. Then they started talking about Leelah Alcorn, the trans-teen who took her life last December. Beyonce said she didn't know anything about it. I told my daughter that Mrs. Carter probably doesn't read about current events. Then Jay Z and I were walking through New York City. (In my dreamlife, NYC is based on what I believe NYC looks like, and not what it actually looks like. I've been there once when I was 15. I have no idea what it looks like. However, in every dream I have that features NYC, the same green building shows up across from the same triangle shaped median, across the street from a fancy library.) I asked Jay Z if he ever walks around without a disguise. He said never. I asked him if he ever just dressed like a normal person in regular clothes that aren't expensive or custom made would he get recognized and he said yes. Then we were driving in a car through Big Bear, the car turned into a rickety old private plane and the landing strip was in an alley.
Brought to you by Andrea