Aunty Ku'uipo of San Diego; All in the Hands

Today at the Marin County Fair my oldest and I saw a `ukulele group perform; The Ukulele Friends 'Ohana.  While we were waiting for the group to set up I noticed an old woman sitting near the stage.  I had never seen her before and never heard of her before, but I knew there was something to her. I pointed her out to my daughter. See that Aunty over there? Yeah, the old lady with the lei po`o. I bet you she's somebody. 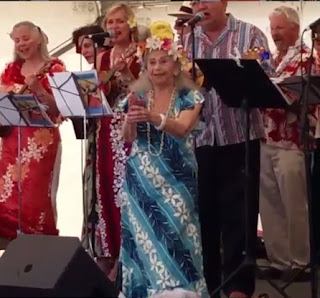 At one point during the performance this woman was invited to the stage; 96 year old Auntie Ku'uipo from San Diego. The old women stood up and walked onto the stage. When she started dancing to "Lovely Hula Hands" I could tell immediately that she had been dancing hula all her life. Her body no longer moved as it did when she was 20. It was now more cautious; tempered by all the things that make a body old. She moved with a grace and confidence underlined by experience. On the outside, her body may have not been able to do get down in `aiha`a as far as she used to, but it didn't matter. You could just tell; her fingers so fluid and the Aloha you could feel coming out of her was such an honor to watch.

As we were leaving the fairgrounds, Aunty Ku`uipo was walking in front of us. I hurried my daughter along with me and we caught up with Aunty and the women she was walking with. I got up to them and said "Excuse me, Auntys." All three of them turned around. I looked at Aunty Ku`uipo and told her Thank You for dancing and told her she had beautiful hands. She gave me a hug and a kiss then hugged and kissed my daughter.

Email ThisBlogThis!Share to TwitterShare to FacebookShare to Pinterest
Labels: Hula, It was nice, kupuna