On Voting and Taking Cuts in the 9444 Precinct

I hate people taking cuts almost as much as I hate being late. Cutters suck. They share one thing in common with those who are late; lack of respect for their fellow humans. With their desire to be next in line, and ahead of you, they are telling you that they are better. They deserve to be next, not you. Cutters piss me off. I've posted about it before here and here.

All that being said, I cut in front of someone today. At the polls. I might suck. 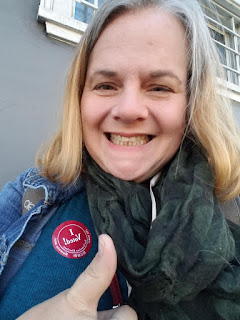 The polls opened at 7am, but when I got to my polling place, the good folks at 9444 were having trouble setting up their counting machine. There was one person standing and waiting. She was standing about 5 feet away from the table where you check in and get your ballot. I asked her if she was in line. She said she was all checked in and she was done.  I didn't quite know what that meant so I asked her again, are you in line. She said no, she was done. I proceeded to walk over to the table to check in. The guy running check-in was having trouble setting up the counter box so I had to wait a bit to get my ballot. Finally, about 15 minutes after the polls officially opened, the man came over and started looking for my name in his book. The woman who was standing 5 feet away from the table; the woman who told me she was done told me that she was waiting in line and I had taken cuts, but whatever, it was fine with her. I told her that I had asked her if she was in line and she said she was done. She said "well, if I was done, why would I still be here." I offered to let her go ahead of me. She declined, then told me again how she was first. I told her again about what she said, and then told her it wasn't my fault she didn't know how to answer a question properly, as I asked her point blank "are you in line?" and she said "no, I'm done."

So to the lady who told me she was done, and not in line and standing 5 feet away from where any reasonable person would think a line should start, I'm sorry I took cuts. If you had told me you were in line, and if you had actually been standing in line, I wouldn't have taken cuts in front of you. I admit I was a bit of a dick to you and I'm sorry for that part. Nobody should have anyone be a dick to them, especially at 7:15am.

The upside is that she and I both voted.
Brought to you by Andrea