Trickle Down Economics - A Pointless Rant about Water Walter

I have never been the kind of mom who enjoys going to playgrounds. I don't really like going to the playground. Now that my kids are older and I don't need to be with them the whole time, and I can sit on a bench and read, the playground is OK, but for the most part, the playground has never been my jam. One of the things that bother me at playgrounds is the other adults; not all of them, just some of them. Like the ones who think it's OK to sit on the play structures and play on their phones, blocking the kids' path and thwarting every single game of "the sand is lava."

One thing I do like about the playgrounds in my neighborhood is the unspoken rule of sand-toy sharing. If a kid leaves their toys in the sand and then say, goes to play on the swings, their toys are fair game for other kids to play with so long as they don't take the toys out of the sandbox and they stop playing with the toys when it's time to pack them up and go home. I don't know if this is common in other neighborhoods, but it is in mine. It is a good practice. 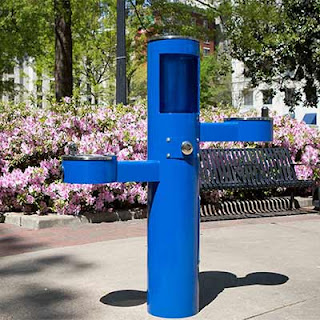 Anywhoozle, I had me an incident a few weeks ago.

Pua and I were at the playground. There were a lot of kids there that day and a good number of them were playing in the sand, making trips to and from the water fountain filling their buckets and cups in the dispenser for water bottles.

Pua started playing with some boys, 2nd or 3rd grade looking. She going back and forth to the fountain and sandbox filling their bucket. Pua was happy to stand in line with all the other kids at the fountain waiting to fill her bucket. On one particular trip to the fountain, she and a grown-up, a grown ass man, were walking to the fountain. He beat her to the fountain with his gallon sized bucket and started filling his, before letting her fill her pint sized bucket. I walked over to them. I asked him why he didn't let her go first. Her pint sized bucket would take only 30 seconds to fill, his gallon sized bucket was going to take a 4 minutes (I know, I did the math). He said "we're working together." I looked at what he thought "working together" was. Her bucket was at the bottom of the fountain picking up all of the water that came out of the leaky pipes. I looked at the man and said "Ah, Trickle Down Economics, nice." The man got a weird look on his face, then gave me a really dirty look; (Ok so to him 10 out of 10 getting the reference, but negative several million points for actually thinking that method is fair.)

With her trickles from the leaky water dispenser, Pua and I then walked back to the sandbox. He followed me and asked me if I was upset with him. I told him that he should have let her go first since her bucket was so tiny and he was a grown-ass man with a gallon-sized bucket, 8 times bigger than her little bucket. He said he was filling water for his daughters sandbox. I told him that's all well and good, but they were the only two at the fountain at the time, and the decent and grown up thing to do would have been to let the little girl take 30 seconds to fill her bucket and not make her wait 4 minutes for him to fill his.

Turns out the boys Pua was playing with were his sons. They scolded him for not letting her go first and then followed it up with "Dad, just let it go. We're playing nicely," they said.
For the rest of our time at the playground we sat at opposite ends of the sandbox, glaring at each other and watching our respective kids play together nicely.