What do Frank Zappa, Jane Goodall, Vanna White and I have in common? 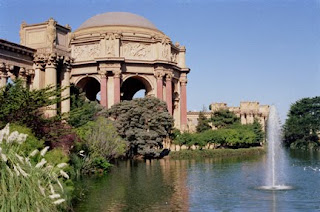 I know, you think you know the answer. The Vanna White thing tipped you off. The thing that Frank Zappa, Jane Goodall, Vanna White and I have in common is that we all like(d) to crochet! FAIL! You're only half right, which also makes you half wrong. Vanna and I do share a love for crochet, but guess again my friends.  We all make good Pant Hoots? Wrong! Give up? Frank Zappa, Jane Goodall, Vanna White and I have performed on the stage at the Palace of Fine Arts. Cool, eh? OK, so I haven't actually performed yet, but I will, so there. On Saturday October 24 at 8pm and Sunday October 25 at 1pm and 6pm I will be able say that I've danced on the same stage that Tito Puente played on. That's so freaking cool! I'm very excited. My hubby and daughter, my inlaws, my friend P and a friend of his, my friend KQ and a friend of hers, and my co-worker and her sister are coming. Very cool. I can't wait to see you in the audience.

There is a bit of sadness connected to it, though.

There are a few people I really wanted to come, but they are not. I could just chalk it up to some of my friends being flaky, maybe some of them don't want to spend the $25 per ticket, maybe for some of them dance just isn't their thing, but I have to tell you, this bothers me.

I'm not alone, however. I was talking to a few of my Hula Sisters about this. One of my hula sisters said that a friend she had known since grade school isn't coming. I do as well. Another hula sister has some friends who know she dances, and they think "good for her" but aren't really interested. I have friends like that, too. We decided that our flaky friends weren't bad people, they just don't realize how much this means to us and we just need to suck it up and get over it already.

We have become so invested in this show with more practices than our families have patience for, we're spending money on costumes, making our own leis. We walk around with headphones on doing mini hula as we walk down the hallways or down the street. We hula at red lights strapped into our seats. We are constantly practicing, thinking about the show, figuring out how we're going to do our hair and makeup. Trying to remember where we are in the line-up. Our lives have been on hold and we forget that with as much as hula means to us, it doesn't mean that much to our friends who aren't a part of it. Well friends, we are inviting you to be a part of it. All you got to do is pay $25 and sit relatively still for 90 minutes, and you're done. An opportunity like this doesn't come often and we're excited about it, we want you to be a part of it.

Email ThisBlogThis!Share to TwitterShare to FacebookShare to Pinterest
Labels: Hula