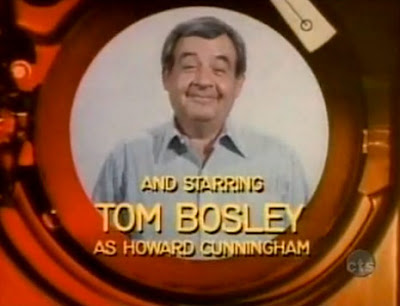 I had a dream a few mornings ago. I should have written about it that day but I was so busy I couldn't sneak any time away to write. I have to remember that it's a bad idea to wait to write when dreams are concerned. A few mornings ago I had a dream that I was at a bar. It was really crowded. I was walking along the "employees only" side of the bar and I happened upon Tom Bosley. Tom Bosley had really long straight hair parted in the middle, not unlike Neil from The Young Ones, except that it was brushed, well groomed and one could tell Tom Bosley had a much better diet than Neil because his hair looked better (not part of my dream but once upon a lifetime ago I worked for The Food Whole and Tom Bosley came in and I saw him buy 5 roma tomatoes and a loaf of Grace pugliese bread).
He kept flipping his hair back much in the same way Cher did in the 70's. 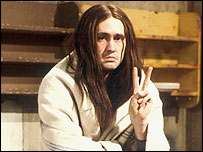 Tom Bosley had diamond piercings in his face where his dimples would be. Tom Bosley was glowing with happiness. Now, here's where I need to remember to write down my dreams right away instead of waiting until the weekend, Tom Bosley told me that something happened to him recently that made him very happy. I can't for the life of me remember what it was.
Lesson Learned.
Brought to you by Andrea