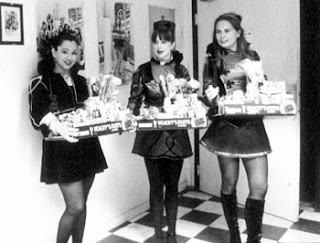 I've mentioned it before, so many times you're sick of it, probably, but I am at the 20 year point. 20 years ago this month I moved to San Francisco. I don't remember the exact date, only that it I drove up to San Francisco with my friend P. We first drove up here in his VW Bus, spent a week or so in a crappy 1 bedroom apartment on Haight and Pierce with two other roomies, our friends E and I who moved up here a few months before we did. I had no idea what I was getting into. I had $900 in my pocket, from selling my 1981 VW Rabbit. I thought it was a fortune. It wasn't, but I got by. Then we got a pretty decent flat in The Outer Richmond. It was a pretty nice place. We each had our own bedroom, there was a common room and a pretty good sized kitchen, plus there was a yummy bakery across the street from us. That bakery was a pretty good bakery. It's closed now and a pizza place is in its place. I've eaten there a few times. It's good. A week or so after P and I got our new flat we flew back down to Long Beach to get the rest of our stuff. We drove back up in P's dad's convertible mustang. It took forever because that freakshow artist Christo had a buncha yellow umbrellas all along the 5 freeway and tons of people were stopped along the road to look at his buncha yellow umbrellas. Luckily the radio gods had our back. We knew the words to every song that played on the radio that night, and all the songs were a mix of common guilty pleasures and just plain old good songs. Boston, Chicago, Styx, Eddie Money....whatever radio station it was was playing them all. Traffic was bad, but we had a good time.
In the first few months of living at this new flat, I was hanging out with this girl one night. Her name was Tess, she went to school with Oliver North's kids, she had a pit bull whose name I forgot, she rode a motorcycle and she had a Keith Harring-esque tattoo on the side of her head. We went out to some bar in SOMA. While we were in there some gals came in, looking like cigarette girls, carrying trays with a nice mix of sugar and salt items, plus cigarettes. I learned they were called Peachys Puff Girls. I wanted to be a Peachys Puff Girl. I always thought I'd make a good one. I never found out how to be one. I should have just asked one, but they kind of intimidated me.
Tonight Hubby, The Girl and I were watching the Giant's game. I asked Hubby if the rows right behind home plate had waiter service. Hubby said all seats had waiter service. I told him I wasn't talking about the guys who sell peanuts and popcorn, I meant real water service, someone who would retrieve beer, garlic fries and churros, or whatever else you wanted. He said he didn't know. I don't know the answer. I think they must, but I just don't know. Then Hubby said "you know what they need at ATT park?" My first response was "Burritos?" Although I think Hubby thought it was a good idea, it wasn't what he was thinking at the moment. He said that ATT park needed Peachys Puff Girls. I agree.
Brought to you by Andrea