It was good, but I hated that little girl.

I like action packed blockbusters. I quite enjoy watching Will Smith fight aliens, whether it be along side Tommy Lee Jones or Jeff Goldblum. Watching Gary Oldman fight President Harrison Ford, or Kurt Russel and Halle Berry fight a group of terrorists from some unnamed middle eastern country, is just as enjoyable. I want to be Franke Portente running from the law with Jason Bourne. I like watching Casper Van Dien fight aliens while Neil Pactrick Harris reads their minds and Dina Myers takes off her shirt. I will be a happy Andrea when Cowboys and Aliens comes out on DVD.

So here's my question - why did it take so long for me to accept that I like reading books just as blockbustery? 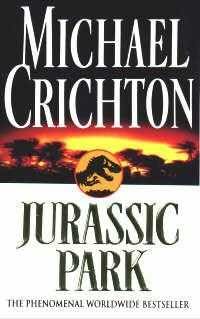 I just finished reading Jurassic Park by Michael Crichton. It was super fun. I loved the extra story lines and details the book had. It made the story more exciting. I like the ending better, with one exception that will reveal itself in just a few paragraphs.
Usually when I read a book that a movie is based on I don't like the changes the movie makes. I get all hung up with the integrity of the story, character development. In this one, the differences between the book and the movie I didn't mind so much. The book was just as enjoyable as the movie. For instance, in the movie, Dr. Grant and Laura Dern were a couple. In the book they weren't. I don't think it really added or took away from the story line. In the book, Dr. Grant liked kids. I like that aspect better. Ian Malcolm (Jeff Goldblum) was a more fun character in the movie and he could have died better in the book. It was sort of a "meh, he's dead" moment. He should have been fed to the raptors. That would have been good.
What I truly hated in the book was the little girl. In the movie the grandkids of John Hammond are a smart 10-ish year old boy and his 12-ish year old sister Lex. In the book, the boy was the same age but the girl was 5-ish. I like movie Lex better than book Lex. Book Lex was whiny, annoying little pest. Movie Lex complained a little but she pulled herself together and saved the day with her mad computer hacking skills. Book Lex foiled every plan to get away from the dinosaurs by whining about ice cream. There were plenty of opportunities where she could have been fed to a dinosaur and the rest of them could have gotten away. Someone should have fed her to the compys or given her to the baby t-rex as a chew toy. She should have met a some kind of dinosaur-inspired end at the end of the book. Yeah, that's harsh, but I really hated her.

Overall, I liked the book. I liked it enough to grab another MC book. I picked up Disclosure the other day at the library. We'll see how that goes. I'll let you know.
Brought to you by Andrea