What's In a Name So Long As All the Letters Are There?

So yesterday I went on a little coffee-fueled rant about how I hate it when people say San Fran instead of San Francisco. Clearly abbreviations bug me.

Strangely, I'm not too bothered when people get my name wrong. I used to get all mad when people would call me ON-drea or an-DRAY-a, but now I just figure why bother,  all the letters are there. And those who totally butcher my name aren't people I'm around a lot so I don't bother correcting them. When it matters, I correct them, when it doesn't, I don't.

On the phone I've been mistaken as Sandra. I think it's because I answer my phone and say "It's Andrea" and my words get slurred a bit.

Today I got called something I've never been called.

I was at Starbucks. I ordered. The guy behind the counter asked me my name and then wrote it down on my cup. When I got my drink, here's what I found. 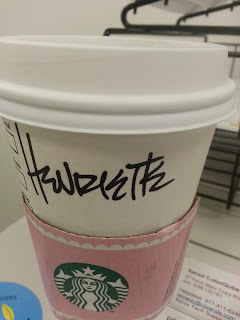