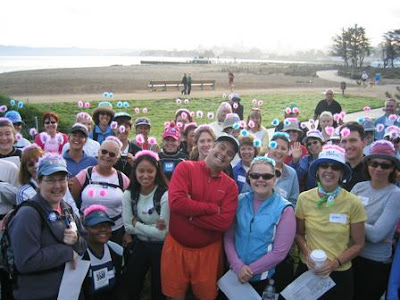 and again in 2006.
I am a Warming Hut Hottie. In 2003 I participated in the Susan G. Komen Breast Cancer 3-Day and walked 60 miles and raied $2000 in honor of one of my sisters. She had a different kind of cancer but I felt I needed to do something and couldn't find any kind of event having to do with my sister's kind of cancer, so this is what I did. In 2006 I participated in the Avon Walk for Breast Cancer. This time I only walked a marathon and a half over the course of two days and again, I did it as a Hottie.
This last year cancer has sneaked its way into my life again. First one of Little Miss' friend's dad found out he had non-hodgkin's lymphoma, then my lovely Hula Sister began her battle with breast cancer, then one of Little Miss' classmates found out he had lymphoma, but I don't know what kind. Now I'm learning that cancer has attacked my family once again.
I feel called into action. I'm thinking of signing up for the Susan G. Komen 3Day for 2009. It's the 2nd week of October, which is 3 weeks before the big Hula Show that I get to be a part of. Can I? Should I do it? Can I raise $2300? I just asked a bunch of people to send me money so I could climb 52 flights of stairs. Can I really be so bold as to ask more people for more money?
$2300 is a lot of dough.
Brought to you by Andrea