Ah, it's Birthday Week.
According to The Girl the school week her birthday falls inside of is her birthday week.
My girl will turn 11 at 11:50am on Friday. The celebration started on Sunday. On Saturday night I made sugar cookies. 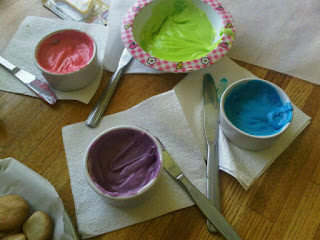 On Sunday we made frosting of unnatural colors. It turns out we have different philosophies on what a painted cookie looks like and the task wasn't as fun as it sounded in my head. I took my time to make polka dots and swirlies, The Girl took the 'lots of frosting makes a good cookie" approach. 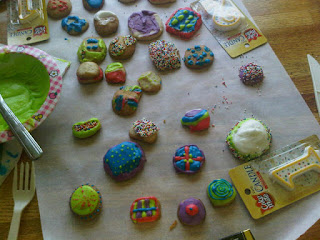 She got mad at me for telling her to slow down and take the time to do her best. She left the table, washed her hands (perhaps metaphorically as well as actually) and went into her room, slamming the door behind her.  I ruined what could have been a fun time. It was not a great moment in Motherhood.

Later that day Hubby found a free Michael Recchuiti chocolate tasting and lecture at a bookstore in the Mission. When we got there the store was packed and spilling out onto the street. We didn't get any chocolate. We ended up taking a stroll around the neighborhood, climbing neighborhood trees and running through piles of leaves.

During Birthday Week The Girl gets to have whatever she wants in her lunch (within reason, of course). This year, as in previous years, she chose to have prosciutto sandwiches. She also added apple-cinnamon rice cakes and chocolate goldfish.

Tonight is Birthday Eve. Our plan was to go to Krispy Kreme to get doughnuts for The Girl's class. There's a kid in her class with the same birthday and guess what she's bringing? (You see where this is going, right?) The Girl is mad because she told her classmate on Monday that she was bringing Krispy Creme and now she can't because that's what the classmate is bringing.

I have to apologize to The Girl that her birthday week wasn't as grand as she had planned it in her head.

I don't want to get involved with pre-teen drama over a box of doughnuts, but the mama bear in me is kicking in. What kind of treat kicks a glazed doughnut's bootie?