Well I did it. I accomplished #12 off my list; participate in the 2010 climb california, in SF for sure, but maybe another city.

Last Saturday The Girl and I climbed to the top of 555 California to benefit the American Lung Association. 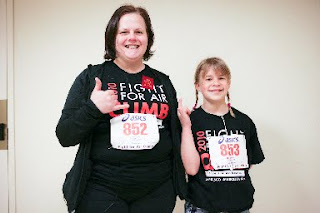 I was concerned about making it to the top. I had been battling a bad cold for the 2 1/2 weeks before that. It had unfortunately turned into pneumonia. My doctor told me not to do the climb. I had to, though. People contributed to the cause in honor of me climbing. I had to at least try. Besides, I wasn't too keen on my daughter climb by herself. I knew we'd get separated during the climb, but I didn't want her to stand in line by herself.

While we were in the queue to start our climb we compared notes as to what we were rockin' on our mp3 players. The Girl chose to climb to the tunes of Brooke White, of American Idol fame. I walked up the stairs with my mp3 player on shuffle, enjoying the music of The White Stripes, Robert Cazimero and Queen with a little bit of Horace Silver and the soundtrack for Brazil thrown in.

I'm so proud of Hyla. 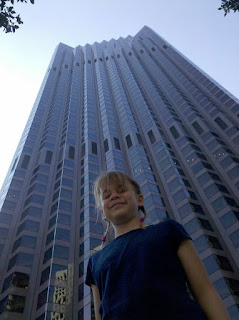 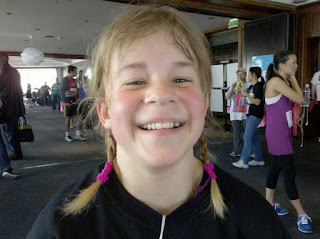 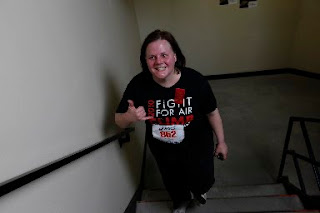 Hubby and The Boy met us up at the top in what used to be The Carnelian Room. They arrived shortly after The Girl made it to the top. When I was at floor 26 I texted the Hubbs to tell him I was halfway there. He texted back telling me he found The Girl at the table full of carbs enjoying a snack. I figure she made it to the top when I was at about the 20th floor. When I got to the top and found the table full of carbs, The Girl ran up to me and gave me the biggest and bestest hug ever. She had a great smile on her face. We were both sweaty and bright red. It was definately a moment to remember.

The Girl wasn't sore at all. Of course she wasn't. She's 11. She's fit. She can run for an entire basketball game and not get tired. I knew she'd fare well. I did well, too. My legs were a little restless on Saturday night, but I wasn't sore, and I didn't get sore the next day.

That afternoon we drove to Oakland for a BBQ at my friend P's house. I felt a little woozy so I didn't drink any alcohol, and I felt better after having some protein - bbq pork ribs, some water and some soda.

I fell asleep right after we put The Boy to bed that night and slept the sleep of the just.

It was a pretty good day. I'm glad I got to share this experience with my daughter. I can't wait to do it next year. I hope we can grow our team from 2 people to 100, or maybe at least 10.

So a Big Mahalo Nui Loa to all of our donors and all who showed us support. We hope we can count on you next year, or better yet, we hope you can join Team Aloha!
Brought to you by Andrea