To Veg or Not to Veg. What a silly question.

My friend Cliff once said "I base my diet on that of the Sasquatch. I eat what's available."

Anyone who knows me knows that I am not a vegetarian. However, if you know me you also know that I love vegetables, I probably eat more vegetables, pulses and beans, grains, etc. than I do meat, and I'm not afraid to try new food. There are some foods in which I would rather go the vegetarian / vegan route for (for example I prefer hot chocolate made from soy milk rather than regular milk) but if I'm craving a steak (not that often, mind you) I'm gonna have a big honkin' steak. If I want a cheeseburger, I'm not gonna settle for Burger King. I'm going to Bills or Tower Burger.

There's a gal in my office who has decided to go vegetarian. She seems to be doing a pretty good job of staying away from eating things with faces. I couldn't do it. I wouldn't want to do it. But that's just me. 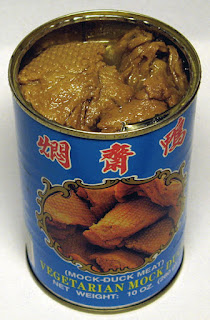 At lunch today she was asking another coworker and me about alternative meat products, other than Tofurky. We told her about Veat, Seiten, Quorn, etc. I always liked Veat. I liked the way it cooked up, and how when torn up it would break like chicken nuggets. It made for good "meat-on-a-stick" dishes for bar-b-ques. Then I told her the about the grossest and most yucky fake meat product, ever: Field Roast.
I told her the following story.
A long time ago I worked for Whole Foods Market. Overall it was an OK place to work, and my story has nothing to do with WFM itself, except for the fact it used to be home to some strange customers. I suppose it is still home to strange customers except now all the customers have money but back when I worked there, gosh, a decade ago, there was still a good amount of "fringe" who would frequent the aisles. So I was working at the Food Hole in the Prepared Foods department (trying to fancy up the deli by calling it Prepared Foods). We had just gotten in a bunch of some new product called Field Roast and were supposed to promote it. Oh my gosh, it was so gross. It tasted like shoe, like shoe that had been walking around Haight St (but upper and lower) all day long, shoe and Bob's Big Boy Season Salt. I hated Field Roast. We had these nasty-ass Field Roast Quesadillas we had to sell. Some woman came up to me and asked me for something in the deli case (sorry, prepared foods case) that was substantial and vegetarian. I gave her a Field Roast Quesadilla. She thanked me and walked away. About 5 minutes later she came marching back to me. I was helping another customer at the time. She pushed the other customer aside, ripped open the Field Roast Quesadilla I had just sold her and then threw it in my face while screaming "I told you I didn't want meat." I was so shocked all I could do was point at the Field Roast shelf talker (grocery-speak for 'sign') and said "I didn't. It's made out of beans." She got a horrified and embarassed look on her face, turned around and ran away. I never saw her again.

I'm going to the Fancy Food Show next week. Maybe I'll try Field Roast again. They are always there with little pieces of their "meat" on toothpicks. Maybe my tastes have changed and I'll like it now. I doubt it, but the company is still around, their products are still sold at WFM and other places. Someone must like them. I'll try it and get back to you.
Brought to you by Andrea