I took the Kiddies out of the house yesterday so Hubby could get some work done. We went to our local Borders, which is closing soon. The Girl wanted to get a few books to keep in her desk at school for "silent reading time." She chose some teenage drama, probably involving horses, and Life of Pi. The Boy, seeing that The Girl was getting something at Borders, insisted he get something too. He wanted $3 post-its or $7 lunchbox. I told him he had to choose. He chose the post-its. I was kind of pissed that the post-its cost $3, becasue it was such a tiny stack, but in the end decided it was better than paying $7.
After Borders we walked over to a nearby public library and I found some books to read on the bus. I picked up Jurassic Park and a Philip K. Dick book. I figured that since I'd seen Jurassic Park at least 20 tiems, I should read the book. I was hoping to bring home a paperback, but instead the JP book is huge and hard cover. Dang, now everyone on the bus is going to know what I'm reading and try to talk to me. I hate when Muni turns into a book club. I'll have to make a bookcover for it. That's a good part about a kindle, I guess. Nobody knows what you're reading. That's one of the only good things about a kindle. The Girl wants one. I'm not sure if I'm going to get her one, but that's another blog post for another time.
The main reason we went to the library wasn't for me to find JP, however. We were there to see The Monkeybutts, family friendly rock'n'roll at its funnest.

There were about 20 kids running around, blowing bubbles and dancing. My kids weren't a part of it. 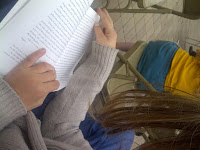 The Girl read her book. While The Boy jumped in his chair. He wouldn't get off his chair and run with the other kids. I don't know why. It looked like fun. I think he had fun. I know he had fun running around the library saying "monkeybutts, monkeybutts" in his 'non-library' voice.
The band played some original stuff, plus a few songs that Mom and Dad would enjoy. My favorite was Boris the Spider by The Who.
They were a pretty fun band to watch. Here are some more pictures I took. (And I have no idea why Blogger is being stupid and making the pics show up sideways.) 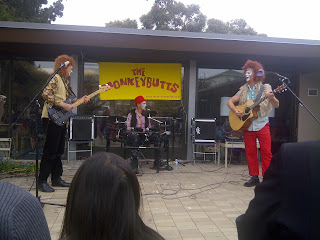 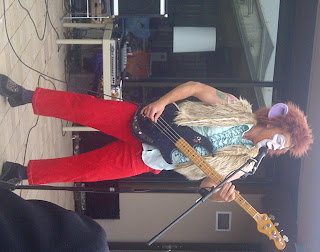 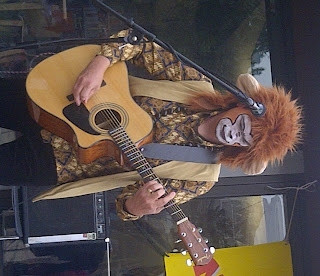