My friend Anika posted Theme #2 on her ACoLab blog.
Inspiration: Your bedside table

This one is a little more broad. Is there a book that inspires a song? Is there a photograph to inspire you to create something? A cookbook with a recipe you tried that held an interesting story to write about? I'll stop hinting at ideas and await your creation. Happy creating!


One day Hubby brought home a cookbook. Not sure where it came from, how he got it or why he decided that this particular cookbook would be a good addition to our home, but upon one of our bookcases in the kitchen did this new cookbook take its place. Yes, we do indeed have 2 bookshelves in our kitchen filled with cookbooks and books about food.

The book was (and still is) called Classical Turkish Cooking: Traditional Turkish Food for the American Kitchen by Ayla E. Algar. 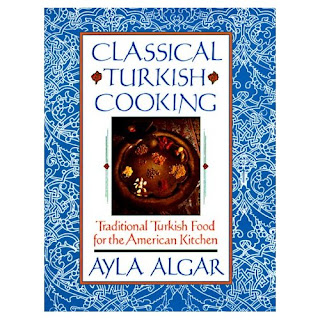 When we first got the cookbook I leafed through it. The recipes sounded delicious. One recipe caught my eye; Tavuk Göğüsü. It was a dessert made with chicken breast. In all honestly, I think it caught my eye because it sounded kind of gross. The rest of the recipes, however, sounded yummy. I decided that if the rest of the recipes were good, then this one, however weird sounding it was to my American tastes, it was probably good; either that or it was one of those things that one has to grow up with to enjoy like Marmite, Natto or Lutefisk.

The cookbook sat on my shelf for a few years, forgotten.

I work with a woman from Turkey. Her name is Derya. Derya is very quiet. She doesn’t initiate conversation very often, but when someone else starts the conversation, she’s very friendly and has a good sense of humor. We often get lunch together. Sometimes we sit and eat it together, but a lot of the time we go back to our individual desks and eat while we work.

I brought Ms. Algar’s cookbook to work with me and asked her to pick out some recipes that I should make. She came back to me a week later with a list. On that list was Tavuk Göğüsü with a little smiley face next to it.

I made this recipe last Monday night. I don’t think it turned out as good as it could have and I get the feeling that some old woman in Turkey that’s been making this dessert her whole life could probably make it really yummy and beautiful looking.

The dessert called for -
The breast of a freshly slaughtered 3lb chicken – I used some frozen chicken tenders I bought at Trader Joe’s.
Milk – I used Horizon Organic Vitamin D milk
Rice Flour – I used Uncle Bob’s Red Mill Organic Brown Rice Flour
Sugar – I used C&H Sugar that had a vanilla bean inside of it for the last 6 months.

There are a few more steps involved than this, but basically you boil the milk and sugar, make a slurry out of some milk and the flour, combine, boil and then add the chicken and stir until thick.

From this point one can spoon into pretty dishes and serve.

The author also suggested putting the pudding in a heavy bottom sheet pan and put over a burner to gently burn the bottom. I tried this method. It made the house smell like burnt marshmallows and chicken. After cooling, I should have been able to cut the pudding into strips and then make sort of a jelly-roll shape out of it. That part didn’t work out too well. I guess I didn’t cook the pudding enough to thicken as much as it should. Also, the bottom didn’t get crusty enough. The whole dessert just looked like a giant mass of pudding skin.

We all took a bite out of it on Sunday night. Hubby and The Boy had some yesterday as a snack. The Boy liked it - he's 2 and it was sticky and sweet, of course he liked it. The Girl and I didn’t care for it very much.

I told Derya about my adventure in making it. She told me I did something wrong and that I shouldn’t have been able to detect the chicken in the pudding.

My question is why add the chicken? If it wasn’t supposed to add any flavor, what purpose did it serve? It’s not like chicken breast has any fat, connective tissue or collagen to speak of that would have helped with the thickening process. It didn’t seem to have a purpose other than maybe adding some protein, but if it’s a dessert, why would it need protein? One would assume the protein was contained in the main part of the meal. Why would it be in the dessert?
Anyhow, the process of making this dessert, my interaction with Derya, my fondness for blogging, my joy of cooking and feeding my family and my desire to enjoy foods in all its forms has inspired me to make the rest of the recipes Derya suggested. I’ll possibly write about those ones as well.
Brought to you by Andrea