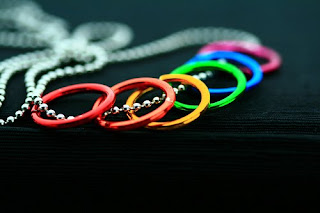 I moved to San Francisco almost 20 years ago.

A few months into my new life I was walking through Noe Valley (still thinking that Noe rhymed with Toe). I came upon a shop window showcasing a nice chain with rainbow colored rings. I thought it was pretty. I was just about to buy one of the pretty necklaces when reality hit. Yup, I should spend the money on real food because I was really sick of eating top ramen or buying triscuits and pairing it with the block of cheese my room mate stuck down his pants at Cala. I didn't buy the necklace, but made plans to go back and get it as soon as I had a little bit more disposable income.

I was telling someone about the purchase I was going to make. I don't remember who it was; probably one of my room mates. S/he told me what the rainbow necklace stood for. I got all freaked out and thought to myself that it was probably a good idea I didn't buy it. I wouldn't want anyone to think I was gay or anything.

This last weekend was Pride. I've gone bar hopping in the castro a few times during Pride but more often than not I tend to avoid any area in San Francisco that's east of Twin Peaks in favor of watching the parade on TV. Sometimes I leave the City all together. I really hate crowds. Large groups of people really get on my nerves and make me all grouchy; tons of people, all of them in my way, not walking fast enough.  Gay Pride, Christmas Shopping, Hardly Strictly Bluegrass, whatever. Crowds bug me.

Someone at work was telling me this morning about how he took his wife, his daughter and his daughter's friend to watch the parade. He commented on how many naked people there were. My attitude was "meh, you've seen one naked parade participant, you've seen 'em all"

I was this 20 year old kid, fresh from the LBC, learning how to live on her own in the big city, afraid to wear anything with a rainbow on it for fear someone would think I'm something I'm not. Now I'm closer to 40 than I am 39. I know who I am and not really concerned with what strangers think (funny, because I get all worked up about what people I know think about me, but that's another post for another time). I know how to pronouce Noe Valley. I even know how to pronounce Gough St. I still don't have much money so I should probably pay the electric bill or put clothes on my kids' backs before I go out and buy a rainbow ring necklace, but if I still wanted one because I thought it was pretty, I would buy it.
Brought to you by Andrea